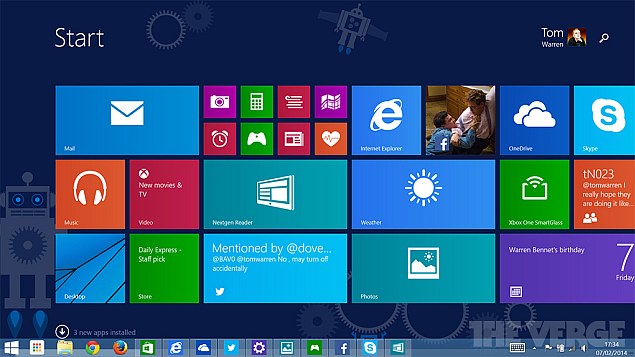 Microsoft generated much buzz online on Thursday when it mistakenly released a build of the much-awaited Windows 8.1 Update 1, ahead of its scheduled launch in April.

What appears to be the final build of Windows 8.1 Update 1 was leaked out online via Microsoft's Windows Update service, as the Verge reports. Users at this point have to install a series of patches before being able to install the full update, for which they need to make a few registry changes, or download the updates via direct links.

At this point however, we recommend users wait the month or so it will take for Microsoft to release the Windows Phone 8.1 Update 1 in April, via official channels.

Most of the changes found in the Windows 8.1 Update 1 are said to be focussed on keyboard and mouse users, as we see a desktop taskbar placed above the Metro UI-style apps, and options that enable the user to minimise, close or snap Metro UI-style apps. The Redmond-based firm is also said to add a 'shut down' button on the Start screen for non-touch user machines. A new search button is also seen on the top-right corner.

Microsoft might also make its Windows 8.1 Update 1 thin-client friendly, as the updated OS is said to support configurations as low as 1GB of RAM and 16GB of storage.

Besides the Windows 8.1 Update 1 leak by Microsoft, other reports indicate some major changes to the Windows Phone 8 platform.

The Windows Phone 8.5 leak, coming from Arnold Vink forum, additionally mentions "Since a WP8.1 application is now almost the same as a WinRT application we can also (at least in the current dev preview) use the background tasks used in WinRT apps which will allow us to run a background task every 15 minutes."

If the leaked images are to be believed, developers will be able to manage notifications by tagging, grouping or replacing them as the new one comes in. The developers can also set a 'ghost toast' and an expiration time that will make the notification appear only in the Action Centre and not as a toast notification on top of the screen.

Microsoft is yet to give an official word on both Windows Phone 8.1 and Windows 8.1 Update 1, so we will recommend users wait for company to officially release the updates before trying to download and experience the new UIs.