Windows 10 update was initially pulled down due of several bugs

Windows 10 October 2018 Update, which was initially pulled down after a number of bugs were discovered, has emerged as the least successful Windows 10 update. The adoption of the October 2018 Update that was released as the version 1809 back in October last year is significantly lower than that of the April 2018 Update (version 1803). The April  2018 update continues to lead the Windows 10 family globally, according to a report. Earlier this month, Microsoft started rolling out the October update automatically to all users in phases to increase the adoption. It, however, appears that the new version wasn't able to reach the adoption rate of the previous April update. The first final version of Windows 10 was released back in 2015 and the operating system has since received seven major updates.

Out of more than 100,000 PCs surveyed, only 12.4 percent run the Windows 10 October 2018 Update, AdDuplex said in its report for the month of January. This is unlike the April 2018 Update that retains its leadership with 80.2 percent. Having said that, the adoption of the October update is almost double from the 5.7 percent share reported last month.

Microsoft brought the Windows 10 October 2018 Update originally in early October last year, but it quickly pulled the new version from distribution due to a severe bug that majorly affected users' personal data. Several users had reported that they face deletion of the entire Documents and Picture folders available on their systems. While the first bug was yet to be fixed publicly, various users spotted another bug that affected the handling of ZIP files and resulted in some data loss due to inaccurately moving the contents of ZIP files. 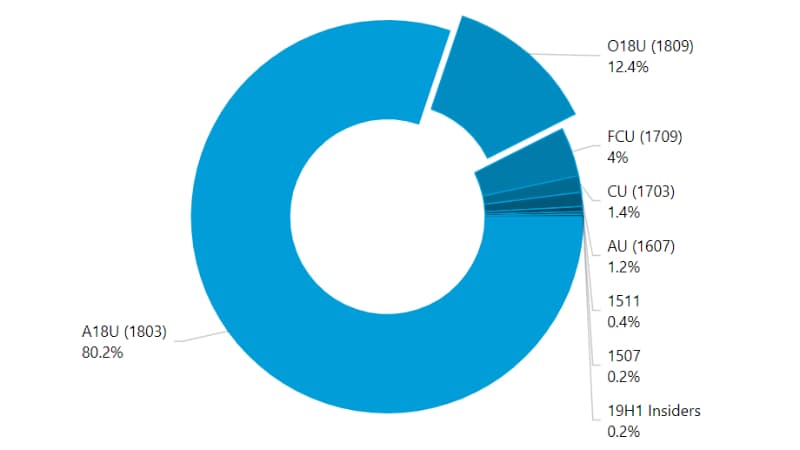 All this pushed Microsoft to release the October 2018 Update in small batches - to keep an eye on the initial issues. However, streamlining the update adversely impacted its adoption. The Redmond company, thus, earlier this month, started rolling out the latest Windows 10 update with the ability to make it installed on systems automatically.

The recent change might help Microsoft increase the install base of the Windows 10 October 2018 Update to some extent. Nevertheless, the company is also believed to bring the next Windows 10 update in the coming future. The update is likely to hit compatible systems sometime in the first half of this year.

"With only a few months to go until the next Windows 10 update is supposed to go mainstream, it is unclear if some PCs may have to install two major updates within a short period of time or go straight from A18U to 19H1," AdDuplex said in the report.