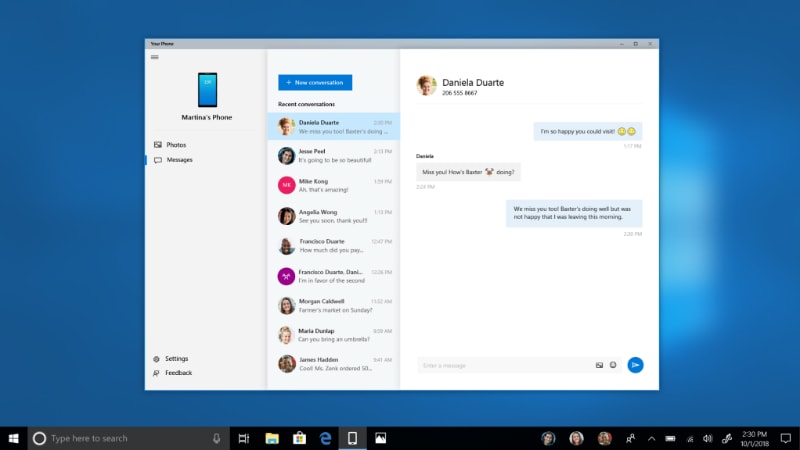 Your Phone app allows you to view, send, and receive SMS from your Android phone on your Windows 10 PC

Redmond, Washington giant Microsoft last week announced the release of its latest Windows 10 Insider Preview build 17755 to all Windows Insiders who are part of the Fast ring. New features in the update for Fast ring users include SMS integration on the Your Phone app that lets users check sync their Android handsets with a Windows 10 PC. It also comes with general changes and improvements, multiple bug fixes, and has its fair share of known issues considering the fact that it is a beta update.

As per the official changelog for Windows 10 Insider Preview build 17755 posted on the company's official blog, SMS integration is coming to the Your Phone app. Testers will be able to use Windows Ink and voice dictation to send SMS messages. Essentially, the Your Phone app now allows you to view, send, and receive SMS from your Android phone, on your Windows 10 computer. iOS handset users can also link their phone to a PC and perform actions such as browsing the web.

The update also comes with general changes, improvements, and fixes. The build watermark at the lower right hand corner of the desktop has been removed; however, it does not mean that this is a finalised build. The issue resulting in slower resume from hibernation on certain devices has been fixed, as has the issue that resulted in HDR video being unexpectedly clipped in certain situations.

Build 17755 for the Fast ring also fixes an issue wherein Windows Hello stayed in the "Getting Ready" state for longer than usual. Known issues with the build include a sporadically functioning Ease of Access Make Text bigger setting, which might also have text clipping issues. In some cases, Narrator does not read in the Settings app when you navigate using the Tab and arrow keys. To resolve this issue, Microsoft recommends that you "Try switching to Narrator Scan mode temporarily. And when you turn Scan mode off again, Narrator will now read when you navigate using Tab and arrows key. Alternatively, you can restart Narrator to work around this issue."