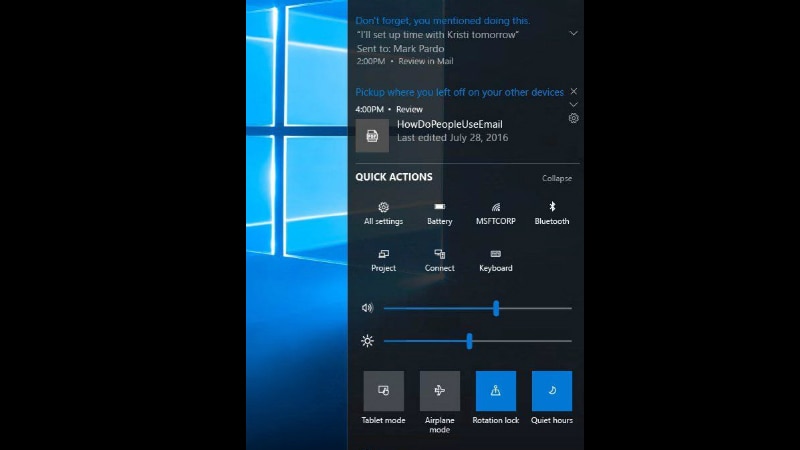 At its event on Wednesday, Microsoft announced the Windows 10 Creators Update alongside the Surface Studio AIO and the upgraded Surface Book. The commercial rollout is expected to happen in early 2017, but the early build has already been made available to Windows 10 Insider Preview members. The update is set to bring a new Paint 3D app, HoloLens integration, and even the ability pin contacts to the taskbar. While all the big features were highlighted, there are many other additions coming with this update that were sidelined at the event.

These new features were showcased in the introduction video that Microsoft released on YouTube soon after. The one minute 15 second video has been neatly dissected by Thurott.com's Brad Sams, and a comprehensive list of all the features that were skipped on stage, but are coming with the update in spring; has been created. This list includes a new music creation tool called Groove Music Maker, support of the digital pen in Word documents, a new Edge Tab browser, a refreshed design for the Action Center, a new personalisation tab in the app store and much more

1. Action Center
Let's begin with the refreshed design for the Action Center. Quick Action items have ditched the large block design and are now just placed with logos. Audio and Brightness settings will be changed with a slider post-update, instead of the pre-defined adjustment used currently.

3. Microsoft Word Pen Support
Microsoft Word is introducing pen support, and in the video you will notice that if a pen is used to strike out a sentence, it is then automatically deleted from the document.

4. Tab browser for Edge
Microsoft Edge will be getting a new Tab browser for ease in switching through opened tabs. The Tab browser enables a small preview, letting the user see which tab has what on display. There is also the addition of a new feature called Session Manager that tries to give you more control while restoring old tabs.

5. Maps collection feature
There is a new collection feature in Maps as well, which lets you create lists of your choice. It is being speculated as being just a revamped version of the Favourites feature, but with the added sorting ability. More clarity on this may be achieved as Insider members start filing their feedback and experiences.

6. Quick Sharing With Contacts
Apart from the option to add contacts to the taskbar, it also allows you to send quick mails to them, and even chat with them on Skype all through one single dialogue box on screen.

7. Other Features
There's also the introduction of a new personalisation tab in the Windows Store that aims to sell themes for Windows 10. The Windows Defender layout has also been changed to synchronize with the rest of the Windows 10 theme.