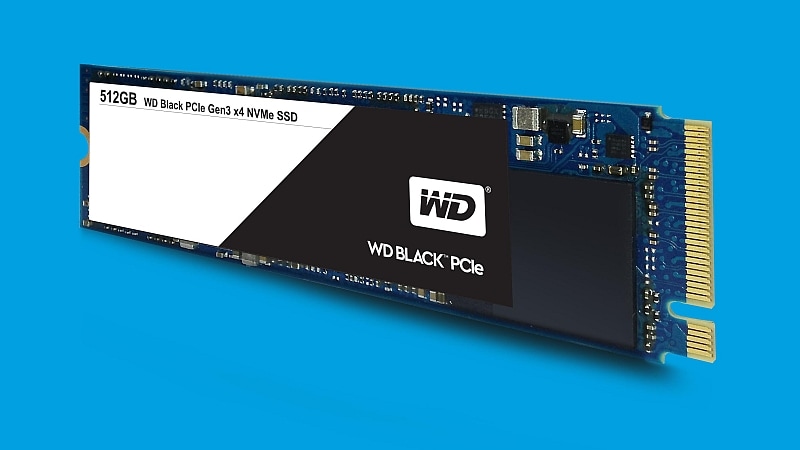 WD at CES 2017 unveiled its first consumer-facing PCIe SSDs, under the WD Black family of storage solutions. The company had recently unveiled WD Blue and WD Green SATA SSDs, and the PCIe based WD Black SSDs will be made available in 256GB and 512GB capacities in the first half of 2017 at a suggested retail price of $109 and $200, respectively.

The company says the WD Black PCIe SSD is a performance PCIe Gen.3 x4 NVMe-based SSD that is capable of delivering more than three times the sequential read speeds of current SATA SSDs. The high capacities in a single-sided M.2 2280 form factor make it ideal as a boot drive, WD added, and users will see boot times reduced by more than 10 seconds when compared to SATA SSDs.

The WD Black PCIe SSD boasts up to 2050MB/s and 800MB/s sequential read and write speeds, a 5-year limited warranty, a 1.75M hours MTTF, and WD F.I.T. Lab certification. The company adds that the WD Black PCIe SSD has been designed with "thermal and power management algorithms beyond the NVMe specification to help with consistent performance as well as low power consumption."

"We are in the midst of a once-in-a-generation interface change," says Khwaja Saifuddin; Sr Sales Director - South Asia, Middle East & Africa, Western Digital. "The WD Black PCIe SSD ramps up performance while delivering worry-free reliability for our customers worldwide. We believe that this will accelerate the transition that is already occurring from SATA to PCIe. Western Digital is uniquely positioned to offer customers a complete storage portfolio-HDD or SSD, and SATA or PCIe form factors for every segment of the market."