Voice, gesture will be ultrabook focus in 2013 - Intel 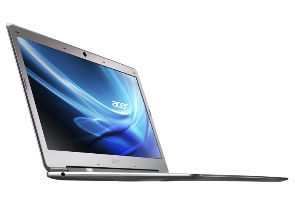 Highlights
While touchscreen enabled super-thin "ultrabooks" are the focus of attention for tech industry players gathered in Taiwan this week, Intel Corp says by 2013 the buzz will have moved on to voice and gesture recognition features.

The world's biggest chipmaker remains confident about consumer spending on innovative devices, despite the economic headwinds buffeting much of the developed world.

Intel is counting on ultrabooks - ultra-thin notebook PCs similar to Apple Inc's Macbook Air and offering some of the technological chic of tablets - to revive a PC market languishing due to the growing popularity of the iPad.

Despite a higher retail price, Intel expects the touch ultrabook will be well received by the market and it will enter agreements with four Taiwanese touch panel makers on Tuesday to enable the expansion of the current capacity for touch-enabled ultrabook convertible designs by 3-5 times.

"You can expect by Computex 2013 convertible ultrabook will be ramping up nicely," Intel's Senior Vice President and General Manager of Sales and Marketing, Tom Kilroy, said in an interview on Tuesday ahead of the opening of the Computex trade fair.

"Touch will be a major attribute in terms of purchase criteria for ultrabook and notebook, and I think the attention we will be talking about next year will be around voice and gesture."

He did not give a precise timetable for the launch of ultrabooks with voice and gesture recognition features, but said "it's around the corner".

Computex is the world's second-largest consumer electronics trade fair, held annually in Taiwan, home to the tech industry's "OEM" manufacturers who make much of the world's computer hardware for global vendors and, increasingly, their own brands.

This year it will feature around 30 touch-enabled ultrabook designs with various styles of foldable, detachable or sliding keyboards. More than 20 tablet designs will also be showcased based on the forthcoming 32nm Intel Atom SoC processor, codenamed "Clover Trail", and running Microsoft's new Windows 8 system.

GETTING THE TECHNOLOGY RIGHT

Some investors have raised concerns that the expensive components used in ultrabooks, such as solid-state drives, make them too pricey for many consumers. A presentation by Taiwan's PC maker Acer on Monday said a touch ultrabook could be priced from $1,799.

"History says if you have the right technology, in the toughest times we have gone through in the last 2-3 years, look how consumers have gravitated to tablets, which is an additional device, not a primary device," Kilroy said.

"So I don't feel there's a limitation that consumers will only pay up to a certain amount of money."

Intel will sign a touch capacity agreement with TPK Holding, Wintek, Cando and Hannstar Touch to ensure there is capacity for 13-inch and above touch panels for the expected growth of touch ultrabooks.

At a meeting with analysts last month, Intel Chief Executive Paul Otellini said the company was on track to reach its goal that ultrabooks account for 40 percent of all consumer notebooks sold by the end of the year.

Intel told Reuters on Friday that it has come up with a design method to make plastic laptop cases as strong as more-expensive metal ones typically used in ultrabooks, that may cut the cost of future ultrabooks by between $25 and $75 without sacrificing quality and cutting the prices of its processors.

Intel is also pushing into the smartphone space this year, where processors based on ARM Holdings' power-efficient chip designs are widely used.

In April, Lava International launched the first smartphone in India using Intel's new Medfield processor, while Orange and Lenovo have just launched an "Intel inside" smartphone. Motorola Mobility Holdings Inc and ZTE will also use the Medfield chips in their upcoming phones, according to Intel.

Kilroy said the company would focus on winning more design deals with smartphone vendors and carriers in the next two years, and start measuring success by volume and share only from five years onwards.
Comments