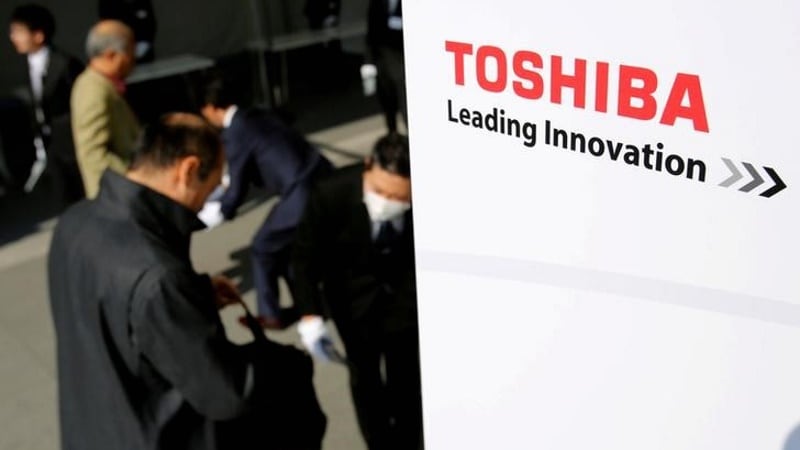 Toshiba Corp shareholders agreed to split off its prized NAND flash memory unit on Thursday, paving the way for a sale to raise at least $9 billion (roughly Rs. 58,338 crores) to cover US nuclear unit charges that threaten the conglomerate's future.

Coming a day after Westinghouse filed for bankruptcy, the extraordinary general meeting saw angry shareholders vent at CEO Satoshi Tsunakawa, with one noting that managers had only last year described the chip and nuclear businesses as core units at the conglomerate.

"How can something that was supposed to be a pillar turn into a hole," said the shareholder, asking Tsunakawa about the company's nuclear business.

"Toshiba has become a laughingstock around the world. You have no clue what's going on," shouted another.

Toshiba, which expects to book an annual net loss of CNY 1 trillion ($9 billion) for this business year on a writedown at Westinghouse, has said it is selling most or even all of a unit that is the world's second-biggest producer of NAND chips.

Initial bids for the sale closed on Wednesday.

A source with knowledge of the planned sale said that about 10 potential bidders are interested. Those suitors include Western Digital Corp which operates a chip plant with Toshiba in Japan, Micron Technology Inc, South Korean chipmaker SK Hynix Inc and financial investors.

The government-backed Innovation Network Corporation of Japan, and Development Bank of Japan are expected to enter later bidding rounds as part of a consortium, sources have said, declining to be identified as they were not authorised to speak on the matter publicly.

A separate source said that Foxconn, the world's largest contract electronics manufacturer, is expected to place an offer which is likely to be the highest bid. Other sources have said the Japanese government is likely to block a sale to Foxconn due to its deep ties with China.

While the vote, which won the backing of more than two-thirds of shareholders, and the bankruptcy filing by Westinghouse are steps forward in Toshiba's struggle to stay in business, it woes are far from over.

Toshiba, which bought Westinghouse in 2006 for $5.4 billion now faces months of complex negotiations over the fate of its US nuclear business, a discussion that could embroil the US and Japanese governments.

The US government has guaranteed loans of $8.3 billion loan to help finance some the construction of four reactors in the United States.

Putting American taxpayers on the hook for any losses related to Westinghouse's failure would be an embarrassment for Japanese Prime Minister Shinzo Abe, particularly if the debacle sparks criticism from President Donald Trump of Japanese corporations in the United States.

During talks in Washington this month Japan's Trade Minister Hiroshige Seko agreed to share information on developments with his US counterparts Energy Secretary Rick Perry and Commerce Secretary Wilbur Ross.

Senior officials from both countries will get a chance to discuss Toshiba further in April when Vice President Mike Pence visit for bilateral economic talks. Ross will travel with Pence, according to a Japanese government official with direct knowledge of preparations.