According to Microsoft, Windows 8.1 will not just respond to customer feedback, will add new features and functionality to improve the touch experience and the operating system's mobile computing potential.

"The Windows 8.1 update will deliver improvements and enhancements in key areas like personalization, search, the built-in apps, Windows Store experience, and cloud connectivity," the company said.

The biggest change that the update brings is the Windows Logo at the left hand corner in place of the Start screen "tip" that comes up when one hovers the mouse pointer in Windows 8. The Windows Logo is more recognisable according to Microsoft. It also gives the ability to users to choose between booting to the desktop directly. At the moment, only the Start screen shows up when one boots the PC.

Microsoft will now allow users to turn their PCs or tablets into a photo frame when it's locked. Users can choose to show a slideshow of pictures stored locally in their devices or in the cloud via SkyDrive. It will also add the ability to take pictures from the lock screen via the device's camera directly from the lock screen. 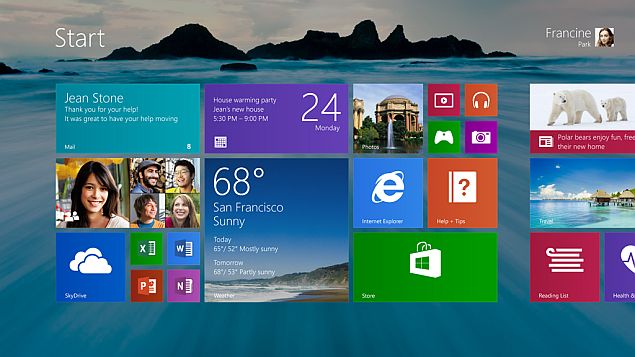 According to Microsoft, Windows 8.1's Search charm will offer global search results powered by Bing in "a rich, simple-to-read, aggregated view of many content sources to provide the best "answer" for the user's query." Search will also offer "Quick actions" that include actions users would like to take, for example, play songs or videos. Results from local files, apps, and settings would be accessible in the same was as they are on Windows 8.

Microsoft will be updating native apps to offer new functionality. The company mentions that the Pictures app will offer the ability to edit pictures and the Music app has been completely redesigned to offer a better experience and adds that it will also be introducing new apps shortly.

Following the Windows 8.1 update, users will be able to snap apps in variable sizes, as reported earlier. It will allow users to run three apps simultaneously on one screen and run different Modern UI/ Metro apps on different displays if connected, while keeping the Start screen on one display. Users will also be able to snap multiple windows of the same application. 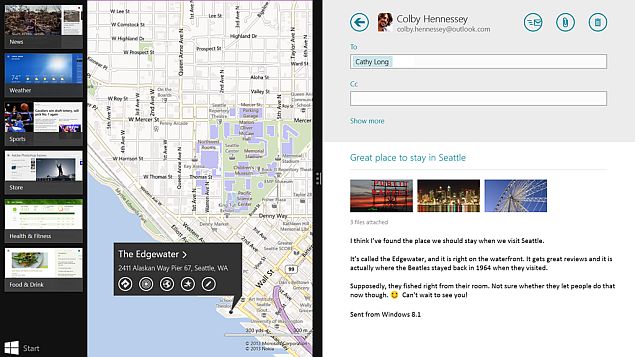 Microsoft is also revamping the Windows Store to show more information with detailed lists of top free apps, new releases, and picks on the homepage.

Windows 8.1 will allow users to save files directly to SkyDrive and will offer an updated SkyDrive app that allows offline access to files.

Another issue that a lot of users faced with Windows 8 was that a lot of system settings were not available in the PC settings and they had to still go to the Control Panel on the desktop to access them.

Users will now be able to change their display resolution, set power options, see the make and model of their PC, change the product key, run Windows Update, and even join a domain directly from PC Settings.

The Windows 8.1 update will bring a new version of the Internet Explorer browser. Internet Explorer 11 would be built for touch and would offer faster page load times in addition to several other new personalisation features.

Users will be able to group and rearrange tiles more conveniently. They'll now be able to select multiple apps all at once, resize them, uninstall them, or rearrange them on the Start screen. Windows 8.1 will require users to press and hold or right click to move tiles around to prevent accidental movement of tiles. The update also brings the ability to filter apps by name, date installed, most used, or by category.
Comments