Taiwan tries to regain its lead in consumer electronics 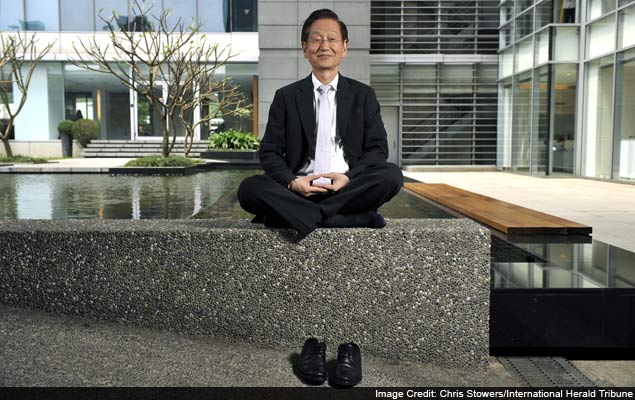 Jonney Shih, the chairman of Asus Computer, has epitomized the Taiwanese electronics engineer for a generation: A slender figure in rumpled, baggy trousers, he once helped Intel solve heat problems in its Pentium 4 microprocessors.

So it has been a surprise during the last several years to see Shih, now 60, reinvent himself with snug-cut Italian suits, innovative designs for tablet and notebook computers and scathing criticisms of Taiwan's test-obsessed, engineering-oriented educational system.

"I don't think the Taiwanese got very good training to drive the mentality of innovation," he said during an interview at Asus' headquarters on the outskirts of Taipei. (Shih also demonstrated his flexibility in the interview, assuming the lotus position while wearing a dark blue Armani suit with a sky-blue Armani tie.)

Fostering innovation has become a mantra among corporate leaders and government officials alike in Taiwan this year because the island's huge consumer electronics industry has run into serious trouble.

"Outside of Asus, all the others are struggling," said Helen Chiang, a Taiwan electronics specialist at the IDC research firm.

Foxconn and Acer have each reported that sales in the first quarter dropped 19 percent from a year ago. HTC's sales plunged 37 percent, although that was partly because the company began shipping the annually improved version of its best-known smartphone in late March instead of February. At Quanta, a 70,000-employee contract designer and manufacturer of notebook computers, sales have shown double-digit percentage drops from year-earlier levels for 14 consecutive months.

Foreign rivals have proved more nimble. In South Korea, Samsung is expanding rapidly in smartphones, tablet computers and other sectors. After embracing the Android operating system early, the company has built on its huge economies of scale in the mass production of components, like display screens and microprocessors.

In China, Lenovo and many smaller manufacturers are relying on labor that, while no longer cheap, is still less expensive than in Taiwan. That helped make Lenovo the only one among the top five PC makers worldwide to eke out a gain in shipments in the first quarter - although by only a tenth of a percent.

And in the United States, Apple, Google and Amazon have shown themselves adept at producing breakthrough consumer products, while pending legislation would allow them to import more foreign engineers at a lower cost than hiring and training domestic engineers

As notebooks and other Windows-based PCs have lost ground, first to Apple tablets and now to Android-based designs, even Microsoft has been indicating dissatisfaction with the pace of PC innovation in Taiwan. Despite a longtime aversion to hardware, Microsoft recently introduced its own Surface tablet.

"The Surface tablet (Review I Pictures) is a pretty strong signal to the whole Taiwan PC ecosystem that they're not innovating enough," said Bill Whyman, a senior managing director at the ISI research firm.

One exception to Taiwan's difficulties is Asus. Its many new Android-based tablets, including one that it has branded with Google, allowed it to surpass Amazon in the first quarter of this year to become the third-largest player in the global tablet computer market, behind Apple and Samsung, according to IDC.

And some of its designs are downright clever. One new model, the PadFone, lets the user slide a cellphone into the back, turning the tablet into an oversized cellphone. Another tablet, the Transformer (Pictures), features a detachable keyboard with a wireless connection and a two-sided display panel that can show a movie on one side to entertain children or guests while the other side is a regular computer display for the owner.

Those innovations have helped keep Asus' sales growing, up 16 percent in the first quarter from a year ago. That was even as worldwide PC shipments fell 11.2 percent, according to Gartner, another research firm.

Taiwan's strengths and weaknesses in pursuing broader innovation echo the challenges of many countries that, for varying reasons, seek to foster the growth of industries based on creativity.

That Taiwan needs to look to 60-year-olds like Shih for innovation is a concern for government officials As economic growth has stalled in Taiwan and new factories have shifted to mainland China, young people have become more interested in civil service jobs and academia instead of industry, government and industry officials say.

One worry is that people with new ideas at universities and government laboratories are not commercializing them. "Our teams think the problem here is those inventors didn't pursue it, to push their inventions into the market," said C.Y. Cyrus Chu, the official who oversees the National Science Council. "Youngsters here are afraid to fail - we are not ready to face failure."

The government has started a program of grants and advice for inventors to help them develop business plans and seek venture capital.

Another big concern for industry and government is that the ability of Taiwan's electronics business to innovate may be hamstrung by the very quality that has brought the sector so far over the last three decades: obsessive secrecy.

U.S. giants like Apple have long treasured the ability of Taiwanese companies like Foxconn to do the final engineering and then mass produce new consumer electronics devices by the millions, with remarkably few leaks to competitors or to the ravenous technology news media.

To win contracts to supply the likes of Hewlett-Packard and Dell, Taiwanese companies routinely divide their staffs and dedicate teams to each foreign customer. They even set procedures for making sure that engineers and buyers from different clients do not accidentally meet one another while having lunch at company cafeterias.

But that secrecy makes it harder for the Taiwanese industry to learn good ideas quickly from foreign and domestic rivals. "They keep secrets and don't duplicate, so the customers are happy to work with them," said Chan Wen-Hsin, a senior industrial technology specialist at the ministry of economic affairs.

Taiwanese technology companies have decades of experience in accepting detailed computer performance benchmarks from U.S. customers and then figuring out the least expensive way to meet those benchmarks. But that may also be an obstacle to innovation now.

The least expensive approach often involves barely exceeding the benchmarks, and not coming up with solutions that may cost more but dazzle consumers.

Chan cited a decision by Steve Jobs, then Apple's chief executive, to choose glass screens for the iPhone instead of plastic screens, which could be scratched.

In Taiwan, he said, "we do not pursue a perfect solution; we pursue a good enough solution."

Yet another concern for Taiwan, much more than for the U.S., lies in a brain drain of midcareer technology experts who speak fluent Mandarin Chinese. A tripling in the number of mainland Chinese college students over the last decade, to 30 million last year, has produced a severe shortage of professors who speak Mandarin Chinese.

The result has been a series of departures from Taiwan's universities and elite, government-backed research institutes. Even the vaunted Industrial Technology Research Institute, which gave birth to global semiconductor powerhouses like the Taiwan Semiconductor Manufacturing Co. and the United Microelectronics Corp., has been losing experienced researchers.

To be sure, Taiwanese companies are now trying to increase the pace of innovation. Acer says that it plans to double research and development spending as a share of sales this year, by 1.2 to 1.5 percent. Gregory Bryant, the general manager of Intel's Asia and Pacific operations, said, "There is a resurgence of innovation and investment in Taiwan."

One lingering cost advantage for Taiwanese companies is that pay for recent college graduates in electronics engineering and computer sciences is low and gradually declining. A rapid expansion of higher education over the last decade has produced a flood of fresh job applicants. Recent graduates typically earn $800 to $900 a month - more than in mainland China, where the pay is more like $500 to $600 a month, but still much less than in the U.S.

Japanese automakers opened design centers in the United States as pay in their home market began catching up with U.S. levels, like the Toyota center in Ann Arbor, Mich., and the Nissan center in San Diego. But Taiwanese electronics companies have been wary of following suit.

Asked why Asus does not open an engineering center in the United States so as to tap U.S. innovation, Jonathan Tseng, the company's vice chairman and president, gave a single-word answer: "Cost."

Asus, a 10,000-employee company, does have an office of 300 employees in Fremont, Calif., which includes sales staff and so-called program managers, who are responsible for pricing, marketing and consumer research.

Analysts say that Asus' innovations may not represent the same kind of big leaps forward as the iPad or iPhone, but may be what other Taiwan manufacturers need to retain their role in the global consumer electronics industry.

"It's incremental, it's true," said Tracy Tsai, a Gartner analyst here. "But compared to other device manufacturers, they are doing better."