SanDisk, the WD-owned flash storage company, on Thursday announced "the next level in flash technology" with the launch of its newest products for the Indian market - the Extreme Pro and Extreme Go USB flash drives and SanDisk Ultra 256GB microSD card. The Extreme Pro is priced at Rs. 8,490 for 128GB and Rs. 13,990 for 256GB, while the Extreme Go is offered at Rs. 3,990 for 64GB and Rs. 5,990 for 128GB - both will be available on Amazon India and select retail outlets. The SanDisk Ultra 256GB microSD card is priced at Rs. 18,990 and will be available from April 1 at retail outlets. The products were first unveiled at CES 2017.

The USB drives were launched boasting of SSD speeds. The SanDisk Extreme Go USB 3.1 flash drive comes in 64GB and 128GB storage capacities with up to 200MBps read speed and 150MBps write speeds, while the Extreme Pro USB 3.1 Solid State flash drive is being offered in 128GB and 256GB options with read speeds up to 420MBps and write speeds of up to 380MBps. 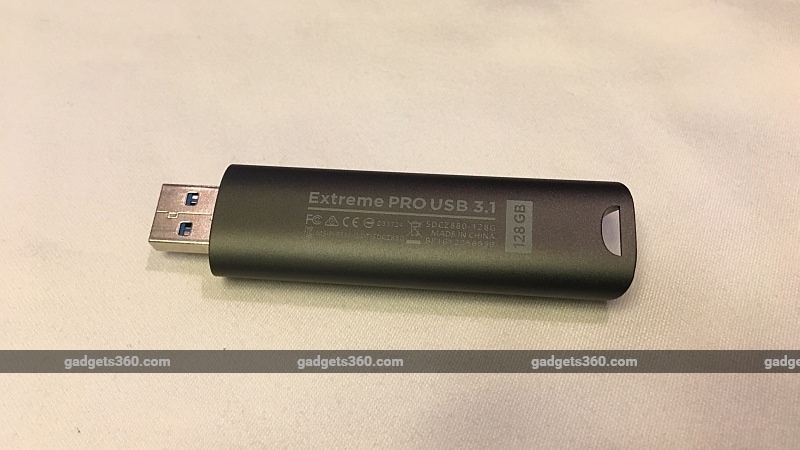 The SanDisk Extreme Pro drive comes in an aluminium casing with a built-in SanDisk SecureAccess software. A RescuePRO Deluxe service is also offered that helps you recover any lost data. At the event, the company demoed the transfer speed of the new Extreme Pro 3.1, uploading a nearly 4GB file on to the drive under 15 seconds. Meanwhile, the SanDisk Extreme Go drive promises to transfer the same amount in under a minute.

Speaking at the launch, Rajesh Gupta, Country Manager of SanDisk India and SAARC Retail Sales and Marketing, Western Digital Corporation says, "with USB 3.1 interface on both the drives, and offering increased capacity at blazing speeds, these drives are our sleekest, and most powerful USB devices till date, thereby allowing consumers quick ways to access and move massive files rapidly." The SanDisk Ultra 256GB microSD card is claimed to be the world's first with Application Performance Class 1 (A1), and was unveiled at CES 2017. The A1 compliance means Android apps are loaded in a matter of seconds from the microSD card. The high-end microSD card will store apps from devices running Android 6.0 and higher.

"The microSD card has been an integral part of the digital revolution by providing more options for high performance, high capacity storage for smartphones," said Rajesh Gupta.