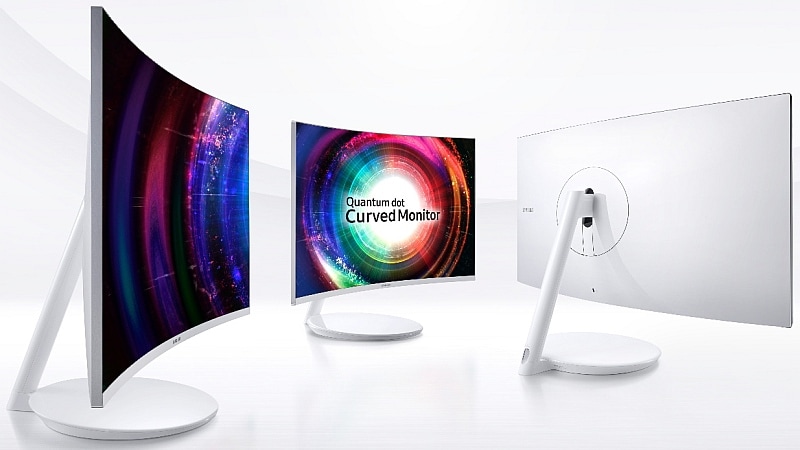 Samsung on Thursday unveiled a new curved monitor with quantum dot technology, said to be designed for gamers. Called the Samsung CH711, the monitor will be officially launched at CES 2017, alongside price and exact availability details.

The Samsung CH711 curved quantum dot monitor will be available in 27-inch and 31.5-inch variants, while the company says it will be released in early 2017. It features an 1,800R radius curvature, and a 178-degree viewing angle. Both variants sport a QHD (2560x1440 pixel) resolution, and the quantum dot panels are rated to deliver nearly 125 percent sRGB colour gamut coverage.

The monitor can be adjusted both vertically and horizontally, while it can be flipped completely vertical as well - though this might be quite pointless with the Samsung CH711's curved display. It is said to sport a three-sided 'Boundless' design, with small bezels on top and either side. Power and HDMI cables from the monitor are hidden within its neck, giving the configuration a clean look.

At CES 2017, Samsung will also showcase the CFG70 and CF791 curved quantum dot monitors, which were first unveiled at IFA 2016 in September and released in the US in December. The company will also unveil new high-resolution quantum dot monitors at CES 2017, also due to be released in early 2017. These are the 28-inch UH750, as well as the 23.8-inch and 27-inch SH850.

Announcing the new Samsung CH711 monitor, Seoggi Kim, Senior Vice President of Samsung Electronics' Visual Display Business, said, "Today's multimedia consumers, quite rightly, have high expectations and demand a truly cutting edge, totally immersive experience that realizes the full potential of whatever they are playing or watching. This year's lineup of curved Quantum Dot monitors offers brilliant design, richer colour and deeper contrast than ever before. We can't wait to share them with the world at CES 2017 in Las Vegas."