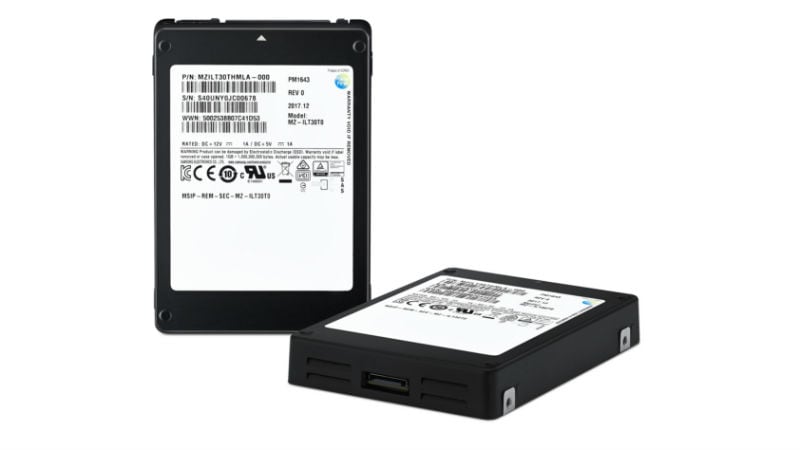 Samsung on Tuesday unveiled the PM1643 that emerges as the world's largest-capacity solid state drive (SSD) with a whopping 30.72 terabyte (TB) storage space. The new SSD is specifically designed to meet the demands of next-generation enterprise storage systems with technologies such as 64-layer V-NAND and 3-bit 512-gigabit chips. It is the successor to the 15.36TB enterprise SSD that was announced in March 2016. Specifically, it is the "industry's largest capacity Serial Attached SCSI SSD."

There is a combination of 32 1TB NAND flash packages that jointly built the PM1643 SSD, each comprising 16 stacked layers of 512Gb V-NAND chips. In addition to the new capacity, the latest enterprise SSD by Samsung is touted to deliver nearly twice the performance levels of the previous generation. The drive has a 12GBps SAS interface with random read and write speeds of up to 400,000 IOPS (Input/output operations per second) and 50,000 IOPS as well as sequential read and write speeds of up to 2,100MBps and 1,700MBps, respectively. These performance benchmarks are four times the random read performance and three times the sequential read performance of a typical 2.5-inch SATA SSD.

Samsung has provided a new control architecture on its fresh enterprise SSD that integrates nine controllers from the previous high-capacity SSD range into a single package. Also, the drive has Through Silicon Via (TSV) technology to interconnect 8Gb DDR4 chips, creating 10 4GB TSV DRAM packages - totalling 40GB of DRAM. This is notably the first time when an SSD has included a TSV-applied DRAM.

On the software front, the SSD has an error correction code (ECC) algorithm that is claimed to ensure high reliability and minimal storage maintenance. There is also support for metadata protection and data retention and recovery from sudden power failures. The SSD comes with an endurance level of one full drive write per day (DWPD) that makes it a perfect option to write 30.72TB of data every single day over the five-year warranty period. Moreover, there is a mean time between failures (MTBF) functionality for up to two million hours.

"With our launch of the 30.72TB SSD, we are once again shattering the enterprise storage capacity barrier, and in the process, opening up new horizons for ultra-high capacity storage systems worldwide," said Jaesoo Han, Executive Vice President, Memory Sales and Marketing Team, Samsung Electronics, in a press statement.