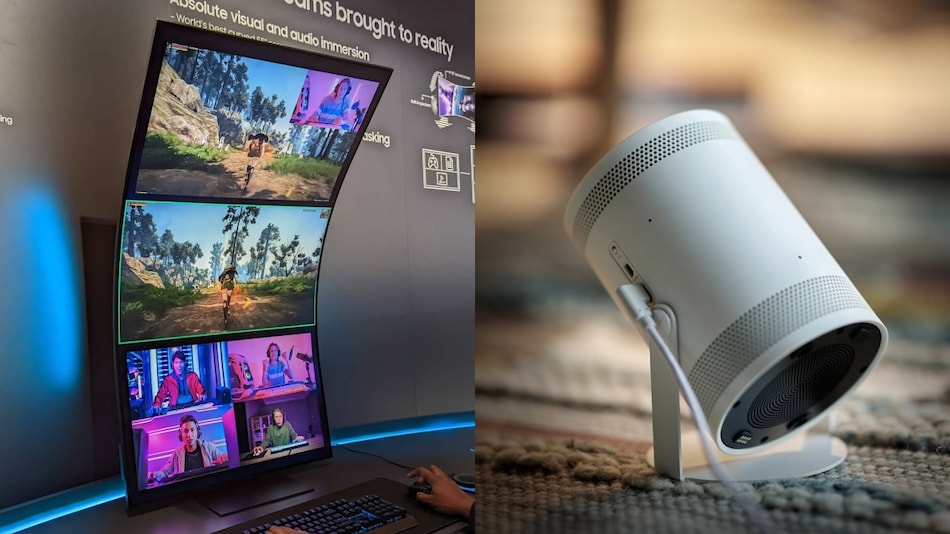 Samsung Odyssey Ark can also be used in portrait mode

Samsung Odyssey Ark curved monitor has been unveiled at CES 2022. This 55-inch 4K monitor is the largest of its kind offered by the company and is aimed at both gamers as well as professionals. Samsung says that the monitor takes “immersion to the next level with a multi-view experience.” Meanwhile, the South Korean technology giant has also showcased Freestyle projector with auto-level, auto-focus, and auto-keystone capabilities. The projector cradle allows rotation of up to 180 degrees, and offers up to 100-inch projection size, Samsung says.

Samsung Odyssey Ark 4K curved monitor measures 55-inch, and comes with a 16:9 aspect ratio. As per a report by The Verge, the monitor will be launched in the US in the second half of the year. It could feature quantum dot colour and Mini LED backlighting. It comes with a height adjustable stand (HAS) with pivot and tilt functionality. It can be used in both landscape and portrait orientation.

Samsung is offering a wireless dial controller to reportedly manage lighting and the interface. Other details of the monitor are not known yet. YouTuber Tim Schofield posted some images of the display on his Twitter handle.

Samsung also showcased a portable Freestyle projector which is “targeted toward Gen Z and millennials.” It is a projector, a smart speaker, and an ambient lighting device all rolled into one. Samsung says that the projector is its first portable screen which works when connected to a standard E262 light socket without the need for additional wiring. It is available for pre-order in the US, and soon will be available for purchase in other global markets in the following months.

Samsung says that Freestyle's cradle allows rotation of up to 180 degrees essentially enabling users to project content on tables, floors, walls, or ceilings. The Samsung Freestyle projector comes with full auto keystone and auto levelling features. This meas it automatically adjusts its screen to any surface at any angle for a straight image output. You also get an auto focus function, and it is claimed to offer a clear image projection up to 100 inches in size.

The Samsung Freestyle projector comes with a dual passive radiator for deep bass, and 360-degree sound radiation for a quality sound. It also provides mood lighting effects with its ambient mode and translucent lens cap. Samsung says that Freestyle analyses the music to pair visual effects and projects them on the wall. Weighing at 830 grams, the device also offers inbuilt streaming services and its mirroring feature is compatible with both Android phones and iPhone. It also supports far-field voice control to summon voice assistants.