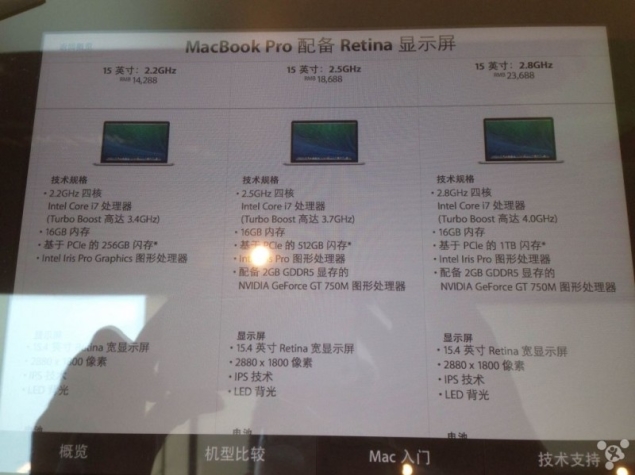 While we continue to eagerly follow Apple for the anticipated launch of the iPhone 6, the Cupertino giant is reportedly set to announce new MacBook Pro with Retina displays on Tuesday. Alleged specifications of the refreshed 15-inch MacBook Pro were also reportedly spotted in an Apple retail store in China on Monday.

A French website, MacG.co, claims to have received a confirmation about Tuesday launch of the refreshed MacBook Pro laptops news from a source that has previously provided relatively accurate information on MacBook Air, iMac, and iPod touch updates.

The MacG.co report (via MacRumors) claims the refresh on Tuesday will include both 13-inch and 15-inch MacBook Pro models, with new model numbers (J44a and J45a respectively). MacRumors adds it has received word that 7 new models are coming to stores on, with three variants for the 13-inch model, and two variants for the 15-inch model, apart from one top-of-the-line variant for each.

Referring to the leaked specifications seen in the Apple China retail store signage showed three 15-inch MacBook Pro models with new Intel Core i7 Haswell processors that were recently introduced by Intel. Other than that RAM for the low-end 15-inch MacBook Pro from the image suggests 16GB instead of 8GB on the previous generation.

The new dual-core and quad-core processors showcased by Intel last week seemed perfect for the MacBook Pro lineup. Intel had introduced new CPUs for laptops based on its mainstream Haswell and low-power Bay Trail architectures. The new chips are updates to existing products in Intel's lineup, and bring slight speed improvements at the same prices as the models they supersede.
Comments