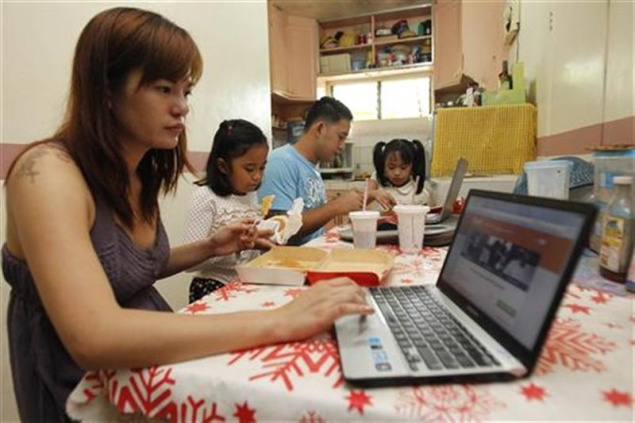 In Romania, one of the EU's poorest countries, hope to many has come in the form of a computer recycling program that is helping jobless adults and disadvantaged Roma youth beat the odds.

"People joined forces and created a win-win situation that gives everyone a chance," said Elisabeta Lacatus, a teacher in the eastern city of Galati.

Lacatus helps autistic children and Roma youth living in dire straits in Galati, influenced in part by her own experience raising an autistic son.

She gets a helping hand from the Bucharest-based "Ateliere fara frontiere" (Workshop Without Borders), whose core activity is recycling computers.

"They have a program enabling homeless and disabled people, as well as school dropouts, to fix computers in order to rejoin the labour market," Lacatus said.

The organisation provides them with counselling and help locating housing in addition to a salary and training.

Since 2009, the program has helped 80 people reintegrate back into the community, with half of them able to find a job elsewhere.

The used computers -- donated by embassies and firms like retailers Carrefour and Auchan, the Dacia subsidiary of carmaker Renault and energy giant GDF Suez -- are then gifted to local schools and communities after their makeover.

The group also sells a percentage of the computers to recycling firms to fund the operation.

It's an effort in line with last year's calls by the EU and UN for countries to improve their recycling efforts, as currently only 13 percent of electronic waste is recycled in the world.

In the EU alone, more than 10 million tonnes of WEEE (Waste Electrical and Electronic Equipment) are generated a year, part of which is exported illegally to developing countries.

Electronic waste, which contains toxic material like heavy metals or brominated flame retardant, can cause widespread damage to the environment and human health.

Among those who benefited from the 1,380 computers donated by the non-governmental organisation last year is School 15 Elena Cuza in Galati.

"In our school, most of the kids don't have toys at home because their families can't afford them", said physical education teacher Nicolae Ciocan.

"Many families have no electricity nor running water, so you can imagine they don't have a computer either."

Ciocan has been fighting tirelessly for 14 years to provide his Roma students with a better future in a highly prejudiced society.

"Those who say that Roma can't be taught are wrong. Every year, we see many of them achieve great success," he said.

"But they have to be offered support since they've been carrying around heavier burdens than others since birth."

Enslaved for centuries, Romanian Roma still face discrimination in the job and housing markets, despite some progress in the field of education.

Last year, outgoing US ambassador Mark Gitenstein compared the Roma's plight to that of blacks in the American Deep South of his childhood.

For School 15, it has to make do with a neighbourhood without public parks or playgrounds and computers that are a decade old.

But Lacatus and the school staff are doing their best to offset the growing discrepancy in computer literacy among the country's children.

Lacatus secured several computers for the school through the Ateliere fara frontiere program, as well as for the space where she offers after-school activities and computer classes much beloved by students.

"I don't have a computer at home, so I'm very happy to learn here," said 10-year-old David, while drawing a house on the screen.

Nine-year-old classmate Petrisor deftly used his mouse to sketch a cherry tree, something he can only do here as his caretaker grandparents can't afford a computer.

"They're very interested in computers because it's both a learning tool and a game for them," Ciocan said about the students.

Down the road, Lacatus would like to harness the power of computers to help autistic children like her son communicate.

But for now, the recycling program is helping people like 24-year-old Thalo Kitoka make ends meet and find meaning by fixing computers.

"I feel useful, my work matters to these children."