Realme Book will come with a USB Type-A port and a 3.5mm headphone jack on the right side. 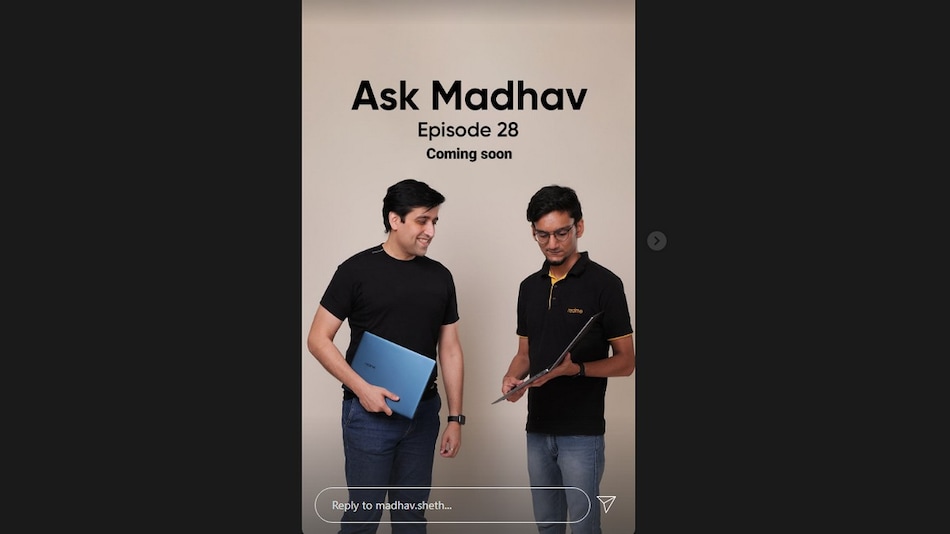 Realme Book is expected to be unveiled in India by the end of this month and now its blue colour variant has been teased by the company CEO. Realme Book will be the company's first laptop and it has been in the news for quite some time now. Till date, the company has only showed off the design of the laptop with no information on its specifications. Recently, a 360-degree video of an alleged Realme Book was leaked showing the design and connectivity options.

Realme CEO Madhav Sheth shared a story on Instagram teasing the upcoming 28th episode of Ask Madhav where he was holding a blue coloured laptop, most likely the Realme Book. This suggests the upcoming Realme Book laptop that is expected to be unveiled by the end of August will be offered in a blue colour. A USB Type-C port and 3.5mm headphone jack can be seen as well at the right side of the laptop. Last month, a report claimed there will be three colour options for the Realme Book including Real Apricot, Real Blue, and Real Grey. The recently teased colour will likely be called Real Blue.

Known tipster Steve Hemmerstoffer (aka OnLeaks) in collaboration with GizNext had shared a 360-degree video of the Realme Book showing a USB Type-A port along with a 3.5mm headphone jack on the right side. Two USB Type-C ports can be seen on the left side. The Realme Book seems to have a MacBook Air-style design. The video also showed slim black bezels and a large mouse pad. The power button is placed above the keyboard on the right side and it seems to have fingerprint recognition built-in.

As mentioned earlier, Realme has only shared the design of the Realme Book till now and no specifications have been disclosed. It is also unclear exactly when the laptop will be unveiled. More information can be expected in the coming weeks.