The ongoing tussle between the US and China isn't just impacting the growth of iPhone models but also adversely affecting PC shipments globally in the fourth quarter of 2018. International Data Corporation (IDC) and Gartner in separate reports highlighted the outcome of the trade war. While IDC shows that the worldwide PC shipments outperformed the forecast of 4.7 percent decline by showing a fall of 3.7 percent year-over-year, Gartner highlights that there was a dip of 4.3 percent from the fourth quarter of 2017. Among other players, HP saw a modest decline in its year-over-year volumes. Lenovo, on the other hand, maintained its lead in the global PC market. Region-wise, the US saw a small increase in volume from the last year, whereas it was all negative in the Europe Middle East, and Africa (EMEA) region and the Asia-Pacific region, excluding Japan, saw a single-digit decline - majorly due to the US-China trade war. The Japan region, however, helped all the major OEMs to mark growth.

According to a quarterly report by IDC, traditional PC shipments, including desktop, notebook, and workstation, totalled just over 68.1 million units in the fourth quarter, a year-over-year decline of 3.7 percent. This, the analyst firm believes, slightly outperformed the forecast of 4.7 percent, though, for the full year, PC shipments declined 0.4 percent year on year.

IDC highlights Lenovo maintained its lead in the fourth quarter with a market share of 23.4 percent and emerged as one of the only two top five PC vendors, alongside Dell, posting a positive year-over-year growth of 1.3 percent. However, HP that came second on the list with a share of identical 23.4 percent, as of Lenovo, shows a decline of 3.2 percent year-over-year "due to a challenging quarter in the Americas". Dell, in contrast, had the strongest year-over-year growth among the top five OEMs with a 1.6 percent increase in quarterly shipments. The company captured the market of 15.7 percent in the fourth quarter.

Apart from the trade war between the US and China, IDC says that the shortage of Intel CPUs in the fourth quarter resulted in overall negative growth.

"While the processor supply challenges are expected to continue into the first two quarters of 2019, PC makers are likely to see the situation improve before the back-to-school season begins during the latter half of the year," says Neha Mahajan, Senior Research Analyst with IDC's Devices and Displays Group, in a press statement.

IDC's Asia/Pacific Client Devices Group Research Manager Maciek Gornicki separately highlights that the ongoing economic tensions between the US and China are likely to create a lot of uncertainty in the business environment in China. "And if the trade war escalates further, we should expect spillover of the impact to other countries, particularly due to the expected fluctuations of the exchange rates impacting businesses across the region," he adds.

Gartner, in its quarterly report for the fourth quarter of 2018, reflects similar market developments. The research firm highlights that Lenovo led the market in the quarter with a market share of 24.2 percent, showing a 5.9 percent increase year-over-year. After the Chinese vendor, HP came second with a 22.4 percent share, a decline of 4.4 percent. Dell took the third position with a market share of 15.9 percent, a slight increase of 1.4 percent.

Apple came fourth on the Gartner list as well, with a market share of 7.2 percent and a year-over-year decline of 3.8 percent. However, Asus took the fifth spot, surpassing Acer, with a share of 6.6 percent, marking a fall of 10.7 percent. 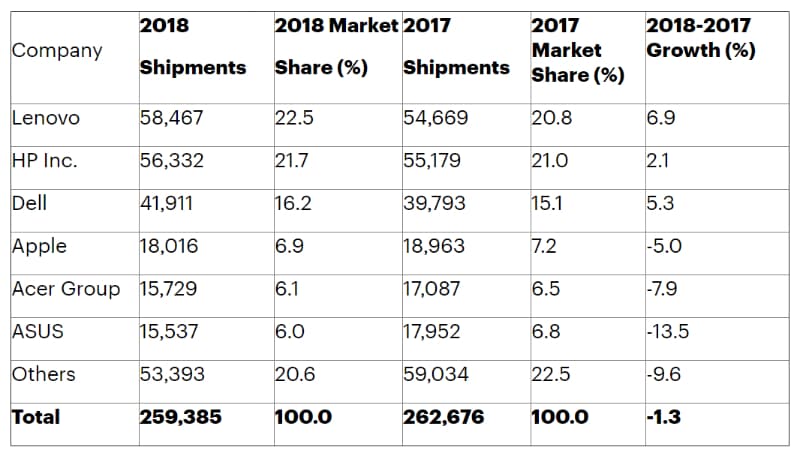 "Political and economic uncertainties in some countries dampened PC demand," said Mikako Kitagawa, Senior Principal Analyst at Gartner. "There was even uncertainty in the US — where the overall economy has been strong — among vulnerable buyer groups, such as small and midsize businesses (SMBs). Consumer demand remained weak in the holiday season. Holiday sales are no longer a major factor driving consumer demand for PCs."

Further reading: Apple, Acer, Lenovo, Dell, Asus, HP, IDC, Gartner
Jagmeet Singh Email Jagmeet Jagmeet Singh writes about consumer technology for Gadgets 360, out of New Delhi. Jagmeet is a senior reporter for Gadgets 360, and has frequently written about apps, computer security, Internet services, and telecom developments. Jagmeet is available on Twitter at @JagmeetS13 or Email at jagmeets@ndtv.com. Please send in your leads and tips. More
Realme 3 to Be Launched in Q1, 48-Megapixel Camera Phone in the Works: Report
Honor View 20 Price in India Said to Be Around Rs. 40,000