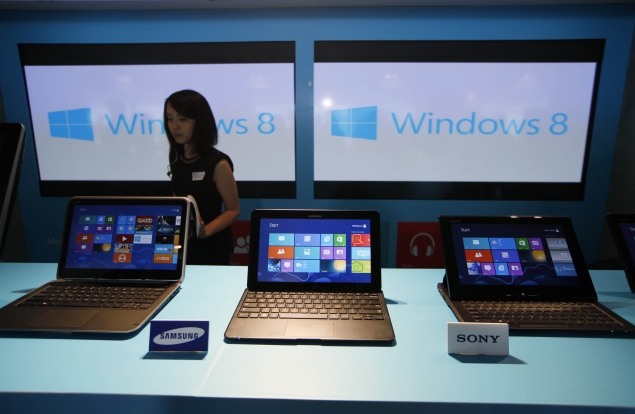 Personal computer sales plunged 14 percent in the first three months of the year, the biggest decline in two decades of keeping records, as tablets continue to gain in popularity and buyers appear to be avoiding Microsoft Corp's new Windows 8 system, according to a leading tech tracking firm.

The huge drop over a year ago, the steepest since International Data Corp started publishing sales numbers in 1994, mark a new milestone in the apparent decline of the age of the PC as computing goes mobile via tablets and smartphones.

Total worldwide PC sales fell 14 percent to 76.3 million units in the first quarter, IDC said on Wednesday, exceeding its forecast of a 7.7 percent drop. It was the fourth consecutive quarter of year-on-year declines.

That marked the lowest level since the middle of 2009, according to competing data tracker Gartner Inc, which published its own figures showing an 11 percent decline on the same day.

Both firms blamed the sales drop on fading sales of netbooks, the small laptops that have been rendered obsolete by tablets, and more consumer spending going toward smartphones.

"Consumers are migrating content consumption from PCs to other connected devices, such as tablets and smartphones," said Mikako Kitagawa, an analyst at Gartner. "Even emerging markets, where PC penetration is low, are not expected to be a strong growth area for PC vendors."

Microsoft's new Windows 8 actually deterred potential PC buyers, IDC said, as users felt they could not afford touch-screen models required to make the most of Windows 8, even though the system runs equally well on standard PCs and laptops.

"People think they have to have touch, and they go look at the price points for these touch machines, and they are above where they want to be and they say, 'I guess I'll wait,'" said Bob O'Donnell, an analyst at IDC.

O'Donnell said other users were simply uncomfortable with the new Windows system, which dispensed with the familiar start menu and uses colorful 'tiles' to represent applications.

New Microsoft operating systems usually boost PC sales, but the lukewarm reception for Windows 8 will likely mean an even greater drop in the market this year, said Jay Chou, senior research analyst with the IDC unit that tracks PC sales.

"Users are finding Windows 8 to offer a compromised experience that doesn't excel either as a new mobile interface or in a classic desktop interface," he said. "As a result, many users find a decline in the traditional PC experience without gaining much from new features like touch. The result is that many consumers are worried about upgrading to Windows 8, to say nothing of business users who are still just getting into Windows 7."

Among manufacturers, Hewlett-Packard Co saw a 24 percent decline in sales in the quarter, but narrowly held on to its title of No. 1 global PC supplier, with 15.7 percent market share. Fast-growing rival Lenovo Group managed to keep sales flat and is now just behind HP with a 15.3 percent global share.

Dell Inc, roiled by plans to go private, along with rivals Acer Inc and Asustek, all saw double-digit declines in PC sales.

Apple Inc was not immune from the decline, as some sales of its own Macs appeared to be displaced by iPads. Its U.S. PC sales fell 7.5 percent in the quarter, but it held on to its spot as No. 3 U.S. PC manufacturer, behind HP and Dell.