Nvidia has taken the wraps off its GeForce GTX 980 Ti, a scaled-down version of the GeForce GTX Titan X which was launched earlier this year. Graphics cards based on the new GPU will be priced significantly lower than Titan X cards and will have slightly lower specifications. The onboard RAM has been reduced to 6GB from 12GB and two of the 24 SMX clusters are disabled. Base and peak clock speeds remain the same, at 1002MHz and 1075MHz respectively.

Zotac was the first to announce pricing in India, with a model based on the reference design at Rs. 55,249 all the way up to Rs. 69,999 for a factory-overclocked model with a hybrid cooler featuring a copper water block. The cards will be available in retail starting from June 6. The older GTX 980 has officially gone down in price by $50 following this launch, but prices here are not expected to go down as much and it will be a few weeks before current stocks are cleared from the market.

The GeForce GTX 980 Ti is based on Nvidia's energy-efficient Maxwell architecture and has a rated TDP of 250W. The company expects that gamers upgrading from cards one or two generations old will be looking to play the latest games at 4K with high quality settings, and says the GTX 980 Ti can provide up to 3x the power and 2.3x the relative performance per Watt of a GTX 680. 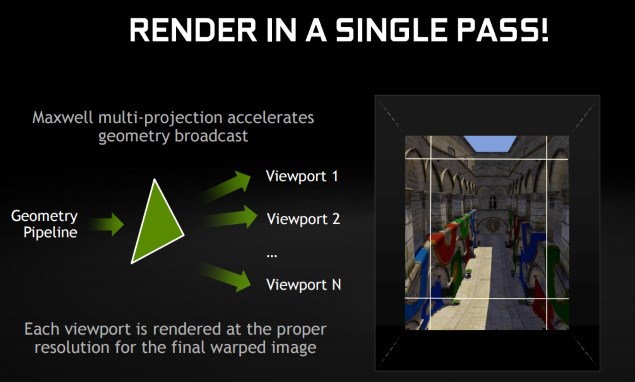 The GTX 980 Ti also supports DirectX 12 Feature Level 12_1 which adds improvements in efficiency and quality. Another improvement is a new VR optics system which gives users a better field of view by eliminating the fisheye filter required to make images focus when projected so close to the eye. Instead, frames are split into nine segments so that the centre is focused normally and the sides and corners are warped in such a way that no part of the frame is lost. The Maxwell architecture allows all nine segments to be rendered in a single pass even though the perspectives are different, which was not possibile on previous architectures.

Nvidia also announced expansions to its G-Sync platform to support variable refresh rates across a wider range of panels, including notebook panels for the first time. Responding to criticisms, Nvidia disclosed new information about how it manages minimum as well as maximum frame times and stated that G-Sync does not introduce any latency.

G-Sync will support games running in windowed mode and will soon be available on notebooks as well. The first notebook LCD panels with refresh rates greater than 60Hz will roll out soon from Asus, Gigabyte, MSI and Clevo.