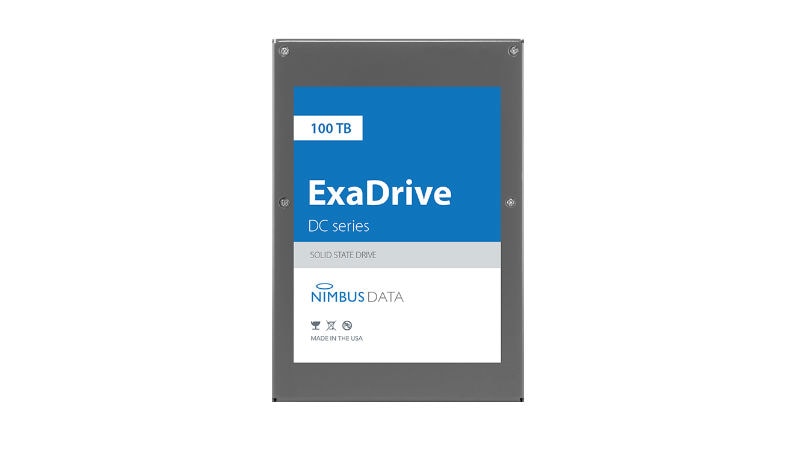 Countering Samsung's recent development, Irvine, California-based Nimbus Data has now launched the ExaDrive DC100 as the new world's largest-capacity solid state drive (SSD) with 100 terabytes (TB) of storage space. The new SSD drive is touted to offer more than three times the capacity of its closest competitor and draws 85 percent less power per TB. This helps to reduce total cost of ownership per TB by 42 percent compared to competing enterprise SSDs, as claimed by the company. In contrast with the Nimbus ExaDrive DC100, Samsung brought the PM1643 last month with 30.72TB of capacity. The new ExaDrive DC will also come in a 50TB storage option, and both new SSD models are currently sampling to "strategic customers" and will be generally available in summer 2018.

Based on the 3.5-inch form factor and SATA interface, the ExaDrive DC100 offers a plug-and-play compatibility. It is also claimed to deliver up to 100,000 IOPS (input/output operations per second) and up to 500MBps throughput. Additionally, the drive uses 3D NAND technology that enables storing for 20 million songs, 20,000 HD movies, or 2,000 iPhones worth of data.

From an enterprise perspective, Nimbus Data says that a single rack of the ExaDrive DC100 can achieve over 100 petabytes of raw capacity. It also helps data centres reduce power, cooling, and rack space costs by 85 percent per TB, giving another reason for enterprises to shift to the latest SSD. Furthermore, the new ExaDrive DC series is rated to cost 42 percent less per TB over a five-year period compared to existing enterprise SSDs. This majorly helps to bring down the total cost of ownership (TCO).

The ExaDrive DC100 is protected with an unlimited endurance guarantee for five years and has a mean time between failures (MTBF) of 2.5 million hours. The company also mentions that there are embedded capacitors to protect buffered data in case of a sudden power loss. Similarly, the drive has encryption, multiple ECC processors, and a proprietary secure-erase feature to ensure data security.

"As flash memory prices decline, capacity, energy efficiency, and density will become the critical drivers of cost reduction and competitive advantage," said Thomas Isakovich, CEO and Founder of Nimbus Data, in a press statement. "The ExaDrive DC100 meets these challenges for both data centre and edge applications, offering unmatched capacity in an ultra-low power design."