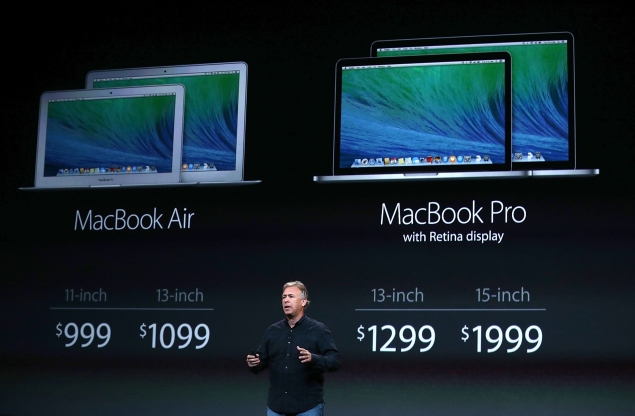 Apple unveiled new Macs ahead of the holiday shopping season and said its latest computer operating system, Mavericks, is available free of charge.

The Cupertino, Calif. company made the announcement Tuesday at an event in San Francisco. Apple Inc. is also expected to unveil its latest iPads to round out its holiday gadget lineup.

A new, 13-inch MacBook Pro with Retina display is thinner and lighter, said Apple marketing chief Phil Schiller, adding that the laptop has up to 9 hours of battery life, enough to "watch the entire trilogy of The Black Knight on one charge." The notebook's new price is lower: $1,299, compared with $1,499 for the previous version.

The Mac Pro, a high-end desktop computer aimed at what Apple calls "power users," will be available in December for $2,999.

Apple also says nearly two-thirds of its mobile devices are running iOS7, the revised operating system it released in September. Twenty million people have listened to iTunes Radio about a month after its release.

Apple is expected to revive its tablet line with new iPads. The company sold 14.6 million iPads in the June quarter, down 14 percent from the same time last year.

Research firm Gartner Inc. estimates that Android tablets will end 2013 with a 50 percent share of the worldwide market versus 49 percent for the iPad. Just two years ago, the iPad commanded a 65 percent market share compared to 30 percent for Android tablets.