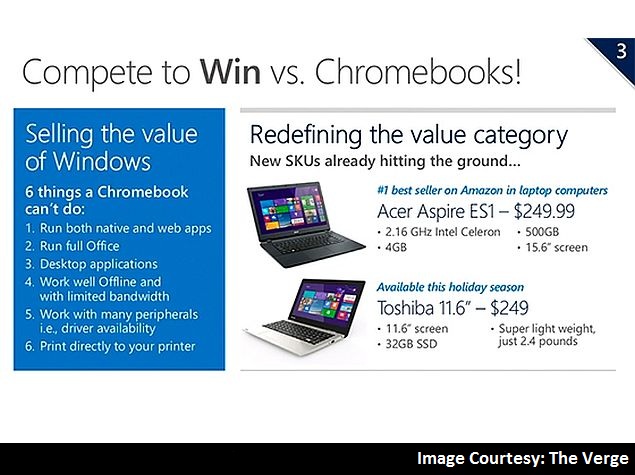 Microsoft appears to have no intention to cede the low-end PC market to Google's Chromebook offerings, as it has announced HP, Acer, and Toshiba will soon unveil inexpensive Windows OS-based laptops at $199 and $249 price points.

The news came from Kevin Turner, Microsoft COO, during the firm's Worldwide Partners Conference (via The Verge) held on Monday in Washington D.C.

The cheapest of the announced laptops is HP's 'Stream', with a $199 price tag. Turner did not provide any details on the HP Stream's specifications, but did reveal the low-cost upcoming Acer and Toshiba laptops will feature 15.6-inch and 11.6-inch displays respectively. The Acer laptop will be powered by a 2.16GHz Intel Celeron processor, feature 4GB of RAM, and a 500GB HDD.

Toshiba's inexpensive 11.6-inch Windows laptop offering on the other hand will feature a 32GB SSD onboard, and weigh roughly 1.1kgs.

Turner also added that HP is planning to reveal 7-inch and 8-inch versions of its Stream PCs for a super-low $99 price tag.

"We are going to participate at the low-end," stated Turner in the conference. "We've got a great value proposition against Chromebooks, we are not ceding the market to anyone."

Notably, Acer last week revealed its refurbished C720 Chromebook with a starting price of $349.99, powered by an Intel Core i3 processor instead of a Celeron one.

Similarly, HP also launched its refreshed 11.6-inch Chromebook PC in June with a starting price tag of $249 for the Wi-Fi model.

One of the other threats that Google might be facing in the low-end PC segment is Microsoft reduced licensing fee for Windows OS and Windows Phone OS.

In April, Microsoft said it was giving away its Windows licences to makers of smartphones and small tablets for free in order to make more of an impact on those fast-growing markets and counter the massive success of Google's free Android platform.

In February, the Redmond-based firm was reported to have slashed the price of its Windows 8.1 OS licences by 70 percent, aiming to get a strong hold in the low-cost PC segments. It was noted that the manufacturers will now be charged only $15 instead of the usual fee of $50 to get the Windows 8.1 licence and sell it pre-installed on devices costing less than $250.