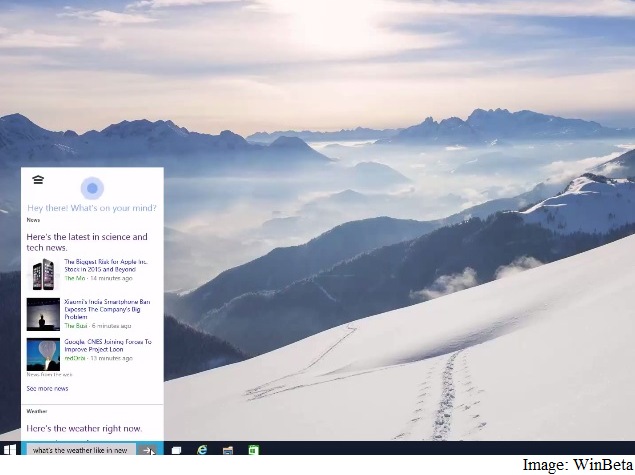 Ahead of Microsoft's scheduled 'The Next Chapter' event for Windows 10 on January 21, where it is expected to unveil the consumer preview of the upcoming OS, an early build has leaked showing numerous changes.

WinBeta claims to have received an early version of Microsoft Windows 10 with build 9901, and has posted a video (below) showing various purported changes in the upcoming build.

In the leaked build, Microsoft is seen to have made some visible changes such as new wallpaper showing upfront alongside Cortana integration. The video shows Cortana will be present on the task bar with search option. Interestingly, the voice-based virtual assistant app is seen to also support voice-commands; though the leaked 9901 build showed that the feature still requires some updates to work.

Some of the other changes include Store Beta, which is a revamped app for Microsoft's app store (currently incomplete); the settings pane appears in Modern window frame; face lifted Settings app (speculated to replace both PC Settings and Control Panel); new Camera (Beta) app; Remind Me; Contact support; and Get Started. The leaked build also included an overhauled Xbox app. The publication speculated that the update to Xbox might result in consumers getting to play Xbox One games on their PC. Some of the other updated apps spotted in leaked build include alarms, calculator, maps, and photos.

WinBeta pointed out, "Apps throughout the operating system are being updated too. A whole number of apps have been given a complete UI overhaul, and we expect many more apps to join in on the facelift soon. This is our first proper look at the direction in which the Modern UI is going, and it's definitely a positive one."

Further evidence for the unification of the Windows Store and Windows Phone Store was also spotted by a user (via WMPowerUser), with the HTC Make More Space app for Windows Phone seen listed on Windows 10 Store Beta.