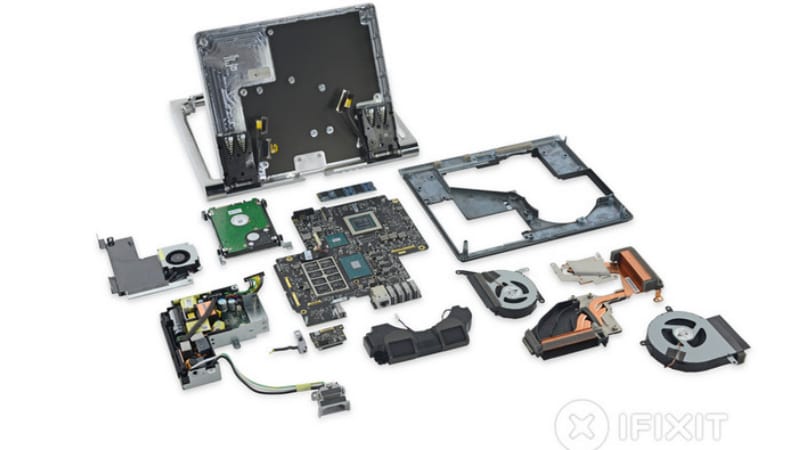 Microsoft has begun shipping the all-in-one Surface Studio, and iFixit soon had a unit for performing a teardown. The teardown of the AIO desktop is now live and reveals that the SSD and HDD drives are easily replaceable. However, the GPU, RAM, and CPU are all soldered to the logic board rendering them non-upgradeable.

Just to recap, the Surface Studio desktop was launched in October and it comes with a tilt-friendly 28-inch display that lets you adjust the screen, so much so that it sits parallel to the table-top for ease in writing and drawing purposes. It also comes with Pen support for precision in artwork, and is priced starting at $2,999 (roughly Rs. 2,00,450 before taxes and duties) with base configurations of Intel Core i5 processor, NVIDIA graphics, 8GB of RAM, and 1TB of storage.

(Also see: Everything You Need to Know About the Microsoft Surface Studio Desktop)

The teardown reveals that the 2.5-inch hard drive/SSD and M.2 SSD slots for storage are both situated at the base of the motherboard. They can easily be changed without disintegrating the display. This means that the 1TB storage can be upgraded whenever the user prefers to do so, without any hiccups.

Interestingly, there is also an ARM chip housed behind the display of this Intel-powered PC. The chip is present to power Microsoft's PixelSense display, notes The Verge's Tom Warren. iFixit has given the Surface Studio a repairability score of 5 out of 10 because a few components like the buttons, front sensors, and speakers that are embedded in the display are difficult to replace if they happen to fail.