Microsoft has announced that it is expanding the availability of its Surface Pro 6, Surface Laptop 2, and Surface Studio 2 devices to 20 more markets. The company hasn't shared the full list of countries getting these Surface devices, but it did note that Surface Pro 6, Surface Laptop 2, and Surface Studio 2 went on sale in the new markets beginning Thursday, February 7. The Windows-maker also revealed that it will be launching the Surface Headphones in eight new markets in March.

According to Microsoft, the Surface Headphones will be coming to eight markets - Australia, Austria, Canada, France, Germany, Ireland, New Zealand and Switzerland – in March.

Coming to the device specifics, the Microsoft Surface Studio 2 is a new all-in-one computer, which the company claims is their “most powerful Surface” device till date. It features a 28-inch PixelSense Display with 4500x3000 pixel resolution and 3:2 aspect ratio and Intel Core-i7-7820 HQ processor. The consumers have the option to get 16GB or 32GB DDR4 RAM and 1TB or 2TB of SSD. The base configuration of the device with 16GB of RAM and 1TB SSD comes with Nvidia GeForce GTX 1060 6GB GPU, whereas the upgraded configurations with 32GB of RAM will pack Nvidia GeForce GTX 1070 8GB GPU. The Surface Studio 2 runs on Windows 10 Pro and includes stereo 2.1 speakers with Dolby Audio Premium, a 5-megapixel webcam with Windows Hello support and the usual set of connectivity options like Wi-Fi 802.11ac and Bluetooth 4.0. In terms of the ports, there are four USB 3.0 ports and one USB Type-C port. 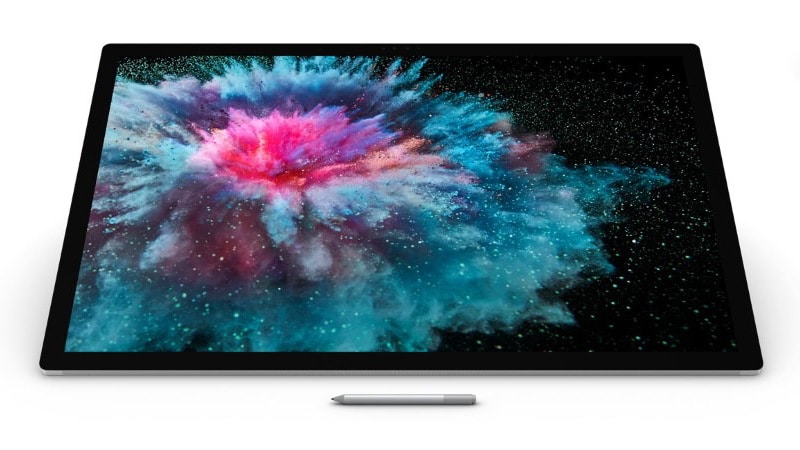 The Surface Pro 6, on the other hand, comes with 12.3-inch PixelSense Touch Display with 2736x1824 pixels resolution and quad-core eighth-gen Intel Core i5 or i7 processors. There is also up to 16GB of RAM, up to 1TB SSD and Intel on-board graphics. It runs on Windows 10 Home and packs the usual set of connectivity options.

The Surface Laptop 2 sports a 13.5-inch PixelSense Touch Display with 2256x1504 pixels resolution and the same processor, memory and storage options as the Surface Pro 6. It also packs Intel on-board graphics and connectivity options such as Wi-Fi 802.11ac and Bluetooth 4.1.

The Surface Headphones are a pair of Bluetooth-enabled headphones that claim to offer up to 15 hours of music playback. They can be charged in under two hours and feature USB Type-C connector and 3.5mm audio jack.