Microsoft is found to have used magnets for attaching the top cover assembly of the Surface Laptop 3.

Surface Laptop 3, the next-generation notebook model by Microsoft, is found to have a straightforward opening procedure that allows users to easily open the top cover assembly and get inside the machine. Engineers at iFixit while covering their extensive teardown have ascertained that the design of the new Surface Laptop provides easy access to internals. This is notably unlike the earlier Surface models that required extensive efforts to open the top cover. Microsoft Chief Product Officer Panos Panay at the launch event earlier this month demonstrated the easy-accessible top cover assembly of the Surface Laptop 3.

During the teardown, the iFixit team has spotted that the Surface Laptop 3 leaves its top cover simply by unscrewing four Torx Plus screws from the bottom. Once the screws are removed, a stab or a guitar pick can be used to gently left up the cover that has magnets instead of any fussy clip-on brackets. Also, it has been noticed that the top cover is tethered by a single flex cable that is also connected with the board using a magnet. All this is indeed new in the Surface family as iFixit had earlier noted that tearing down and opening the Microsoft machines require significant efforts.

After the top cover is pulled off, the Surface Laptop 3 shows the swappable M.2 2230 SSD that is secured on the board with a single Torx Plus screw. The RAM and the Intel processor are soldered to the motherboard. 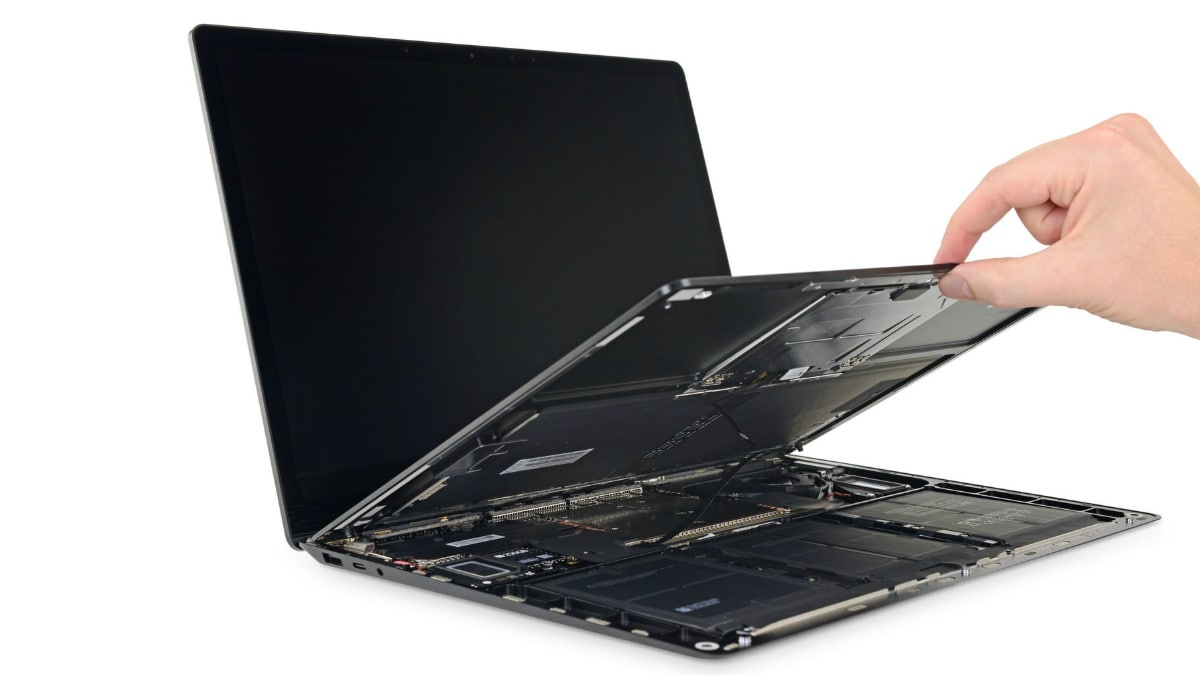 The iFixit team says that easy removing of the SSD makes its swaps, upgrades, and user privacy management a reality for the users. But nonetheless, Microsoft doesn't officially recommend end users to replace the storage unit by their own and underlines the requirement of a "skilled technician" for the replacement.

Alongside the SSD, the latest teardown reveals that the Surface Laptop 3 enables easy repairing of its keyboard, headphone jack, and the display panel. The 45.8Wh battery, however, still requires strong skills to remove its existence.

"Based on its superficial similarity to past Surface Laptop designs, we would have expected something completely non-serviceable," notes the iFixit team in its teardown coverage. "Instead, the 3rd-generation Surface Laptop has swerved confidently into a better, more repairable direction."

Overall, the Surface Laptop 3 has received a repairability score of 5 out of 10, with 10 easiest to repair.

Panay while unveiling the Surface Laptop 3 earlier this month highlighted its easy repairability by removing the top cover assembly.

"We have the same perfect design on the product [Surface Laptop 3]. But just like that, the top can simply come off and you can still feel and see the beauty of this device," he said during his presentation at the Surface event.