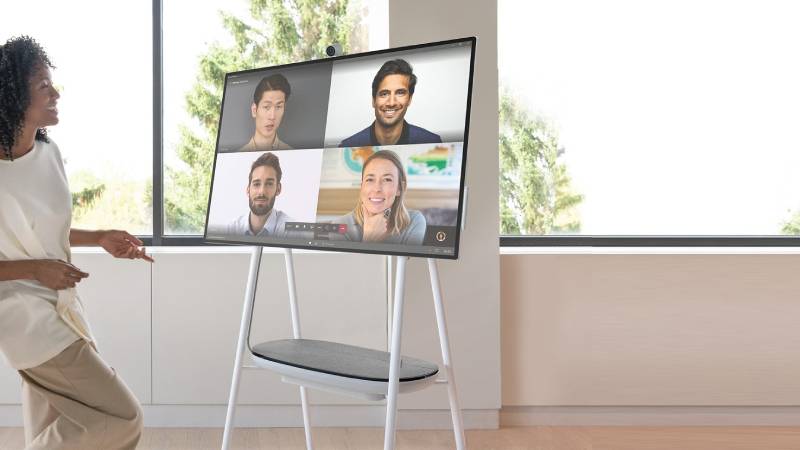 Microsoft has unveiled its new Surface Hub 2S, a smaller and sleeker version of the original Surface Hub, which is an all-in-one PC designed for businesses to use in collaborative environments such as conference rooms. The new Surface Hub 2S has a relatively smaller 50-inch 3:2 display and is designed to be wall-mounted or used on a portable trolley that can be wheeled around in an office. The new Surface Hub 2S is said to be 60 percent slimmer and 40 percent lighter than the original Microsoft Surface Hub. It will go on sale in the USA for $8,999 (approximately Rs. 6,24,790) this June, and Microsoft has also announced that an 85-inch version will be introduced next year.

The Surface Hub 2S is a fully functioning PC with a 50-inch 3840x2160-pixel 3:2 4K+ screen with ultra-wide viewing angles, an anti-glare coating, and relatively narrow borders. It's powered by an 8th Gen Intel Core i5 processor with 8GB of RAM and a 128GB SSD for storage. There's integrated Wi-Fi 802.11ac and Bluetooth 4.1, as well as a fingerprint sensor, Gigabit Ethernet, USB Type-C and Type-A ports, an HDMI video input, and DisplayPort video input as well as output. The Surface Hub 2S is designed to be modular, so that the PC components as a whole can be upgraded.

Each Surface Hub 2S will come with a snap-on 4K camera with a 90-degree field of view for video conferencing, and a Surface Pen for digital note-taking. An array of eight far-field microphones as well as stereo speakers with a separate subwoofer will take care of audio in group conferences. In addition to an accelerometer and gyroscope, there's a Doppler sensor to detect room occupancy. The device is made out of machined aluminium and a mineral-composite resin, and will be available in a platinum finish.

Multiple users can sign in, thanks to a customised version of Windows 10 called Windows 10 Team. Users can set up conferences using Microsoft Teams and Skype, collaborate through Microsoft Office apps and OneDrive, and use the device as a digital whiteboard that recognises handwriting input. Users can currently install apps from the Windows Store, but traditional Win32 software will not be able to run.

The vision that Microsoft has outlined includes the ability to tile up to four Surface Hub 2S screens side by side and use them together. The ability to do this, and also rotate the device between landscape and portrait orientations, will be rolled out in 2020 with an upgraded PC module called the Surface Hub 2X.

The rolling stand was designed by Steelcase, and will cost $1,449.99 (approximately Rs. 1,00,672). Buyers can also hook up an optional APC battery that will allow the device to be wheeled around from one place to another without shutting it down, for an extra $1,400 (approximately Rs. 97,200).