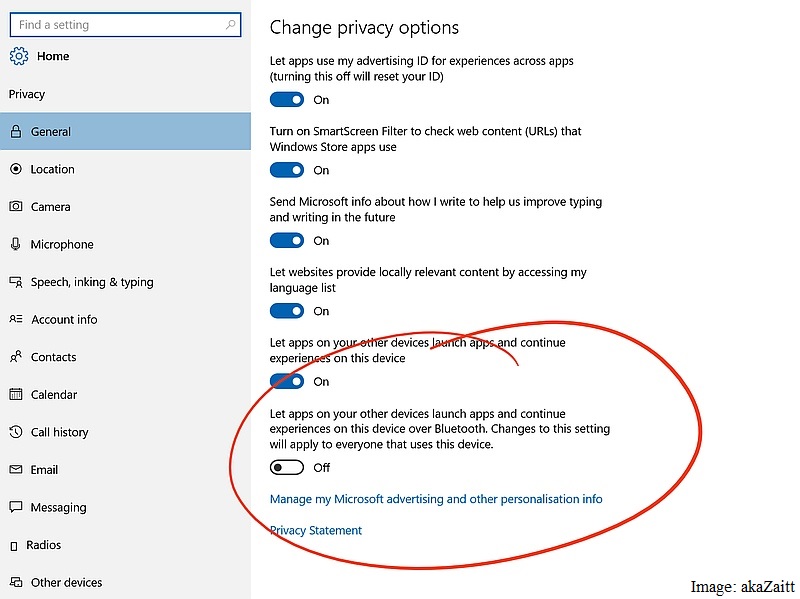 Microsoft has started testing its app handoff feature, a term popularised by Apple when it introduced Handoff alongside iOS 8 and OS X Yosemite, allowing apps to handover data across devices (such as laptops and smartphones) so that users can continue where they left off. The Redmond giant had revealed it had started work on the feature at the Build conference last month. The Windows 10 feature, codenamed Project Rome, aims to let Windows 10 apps connect and share data with other devices via Bluetooth and the Internet.

As spotted by a Reddit user in the latest Windows 10 Insider Preview build of the Windows 10 Anniversary Update, the privacy section now includes a new toggle option that says, "Let apps on your other devices launch apps and continue experiences on this device over Bluetooth. Changes to this setting will apply to everyone that uses this device." The option however, has not been implemented fully as of now. Users could expect it to be released alongside the Windows 10 Anniversary Update later this year.

The details as to how the feature will work are not yet out but the Redmond-based tech giant is testing Xbox SmartGlass-based apps already. These apps can communicate information between each other via cloud and Cortana might play an important part in assisting data sharing to some apps. In addition, the feature will not be limited to Windows but will also club with iOS and Android in future.

"Driving user engagement with your app is important. However, users jump between apps, devices, and different OS platforms throughout their day. This makes retaining users a tough problem to solve Project Rome enables the app developer to pivot on the devices, apps, platforms (Windows, Android, iOS) and the cloud," says the company's dedicated website.

It is worth mentioning that during the Microsoft Build 2016 conference, the company also improved Cortana integration with Android phones. The improved version comes with the ability to sync text messages with a Windows PC. This feature will extend to almost all notifications from the Android device being mirrored on the Windows 10 PC, via the Action Center.