Microsoft's invite for the October 2 event reads, "A moment of your time"

Microsoft has sent out invites for an event that is scheduled for October 2. The event, which is taking place in New York, is expected to be the place where the company's new Surface devices are likely to debut. The Redmond company could upgrade its existing Surface notebooks by launching newer versions of the Surface Pro and Surface Laptop. There are also rumours around a dual-display 'Pocketable' Surface device that is reportedly codenamed Andromeda. This could get an official unveiling at the October 2 event. Earlier this year, Microsoft revealed the 10-inch Surface Go - its cheapest Surface tablet.

The official invite, as shared by CNet, doesn't reveal any details about the announcements planned for the forthcoming event. However, it carries a phrase that reads, "A moment of your time." It is safe to expect some upgrades in the company's hardware as well as software offerings. But of course, the event isn't likely to be the venue for the anticipated Surface Phone. 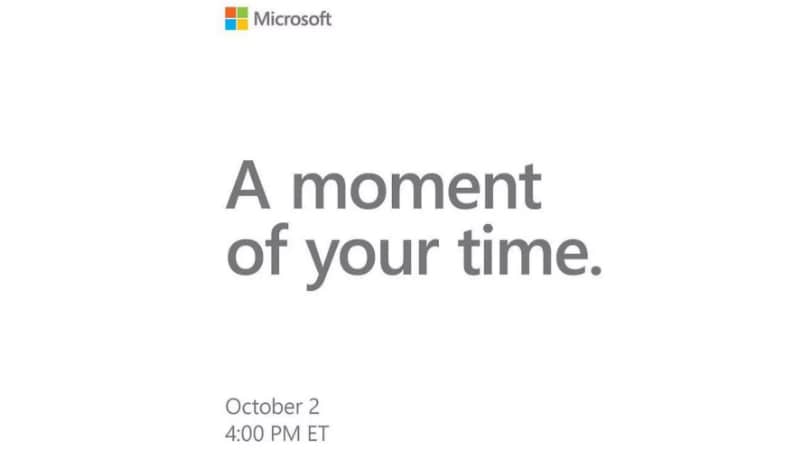 One of the most expected announcements for the October 2 event is the arrival of the Surface Pro upgrade that will have newer processors and better battery life over the Surface Pro 5 that was launched last year. Microsoft is also speculated to bring the successor to the Surface Laptop that debuted in May last year and was launched in India last month.

Some initial reports suggested that Microsoft is set to bring its dual-display Surface device alongside its new notebook models. The device, which is said to be codenamed Andromeda, is rumoured to have a foldable construction and come with two screens. Mary Jo Foley of ZDNet in July reported that the company has brought the dual-display device back to the drawing board as AndromedaOS, the platform that was said to be the backbone of the foldable device was no longer to be a part of the next Windows 10 release. The company could integrate some features of AndromedaOS into the Redstone 6 update. Nevertheless, the uniquely designed device is speculated to be in the pipeline for Microsoft to bring a multi-screen Windows 10 experience. It is likely to be the public release of the company's Courier concept.

Interestingly, Microsoft has chosen the date that sits between Apple's September 12 and Google's October 9 events. While Apple is quite likely to bring its new iPhone family alongside a new iPad Pro model and a new Apple Watch version, Google is speculated to mainly bring the Pixel 3 and Pixel 3 XL as well as Pixel Buds upgrade.

Considering the arrival of the invite from Microsoft, we can expect some rumours suggesting what the Satya Nadella-led team has planned for this year.