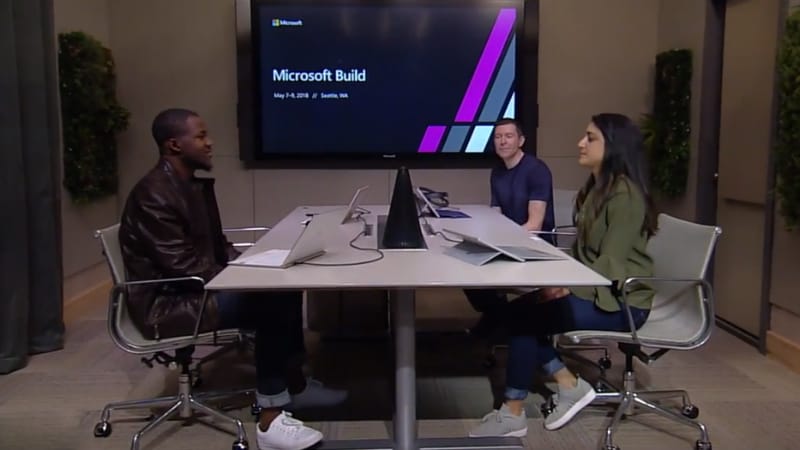 Microsoft at its Build 2018 developer conference on Monday showcased an AI-based device prototype that eases the process of setting up meetings. The hardware includes a 360-degree camera and an array of microphones that jointly help to identify attendees, transcribe voice notes, and translate words from one language to another in a real time. Also, there is Cortana integration that plays a vital role in establishing a modern meeting. The artificial intelligence (AI) powered device that hasn't been announced formally comes in a conical shape and has a built-in speaker and microphones to enable Cortana access.

As specified by Raanah Amjadi of Microsoft Teams during her presentation at Build 2018, the prototype leverages AI efforts to make meetings smarter. "It picks up both audio and video that you can pair with AI Services and Microsoft 365 that help with key tasks like identification, voice transcription, and even real-time translation," described Amjadi, Marketing Manager for Microsoft Teams. The uniquely designed device recognised faces using its 360-degree camera and AI-backed features and provided transcription right from what was spoken during a stage demo. It also offered a real-time translation of the words spoken during the demo directly on the Surface Hub installed on the stage, alongside giving transcription. Likewise, the device noted down all the key meeting points on the Insights & Notes section to help attendees get the minutes of the meeting at a glance.

"Even though we were all speaking over each other and the sound environment here is actually pretty challenging, but AI Services, coupled with the audio and video signals from the device, could still accurately identify who was speaking and when. You'll also notice that it picked up our meeting items and listened to them on the right," Amjedi said while elaborating the functionality of the hardware prototype.

Use cases of Microsoft's development are quite wide as it can power meetings where organisations need to connect with employees spread across a variety of locations, or where they need to interact with hearing impaired people or employees speaking different languages. However, one thing is quite sure that the Redmond company is set to offer the powerhouse of future meetings. The company led by Satya Nadella in the past launched real-time translation functionality on Skype that even extended to calls made to landline and mobile phones, back in December 2016. Similarly, it brought Microsoft Teams as its answer to Slack and other corporate communication services, which is presently used by more than 200,000 companies globally.

That being said, Microsoft hasn't announced any concrete details about the launch of its device powering smart meetings. It is also unclear whether the prototype hardware will actually be available to organisations in the future or it could just be a reference model for third-party manufacturers to start building new meeting solutions.