To say Microsoft faced the ire of privacy concerns surrounding Windows 10 would be an understatement, and the company in the recent past has made several attempts to give more control to users. With the Windows 10 Creators Update, which will start rolling out broadly from Tuesday, April 11, the Redmond-based company wants to become more transparent in its approach and has now released the details of the data that can be collected by the operating system with consent from the users - at both Basic and Full levels. The company has once again detailed the upcoming privacy controls due with the Creators Update.

"For the first time, we have published a complete list of the diagnostic data collected at the Basic level. Individual data points that relate to a specific item or event are collected together and called Events. These are further organised into diagnostic areas. We are also providing a detailed summary of the data we collect from users at both Basic and Full levels of diagnostics," said Terry Myerson, EVP of the Windows and Devices Group, and Marisa Rogers, WDG Privacy Officer, in a joint blog post.

At the The company says that it will be improving the in-product information by providing a short description as well as an option for detailed information about each privacy setting offered to the user. Microsoft says that it has further updated its privacy statement to include more information about the privacy enhancements in the Creators Update. Moreover, the privacy statement now shares more detail about the data company collects and uses to support new features offered with the aforementioned update, it said.

Just like previous privacy statements, the company will be making this information available to users in a "layered manner" online. Microsoft has highlighted that it wants to share more information about the data it collects to keep its users informed of their choices. 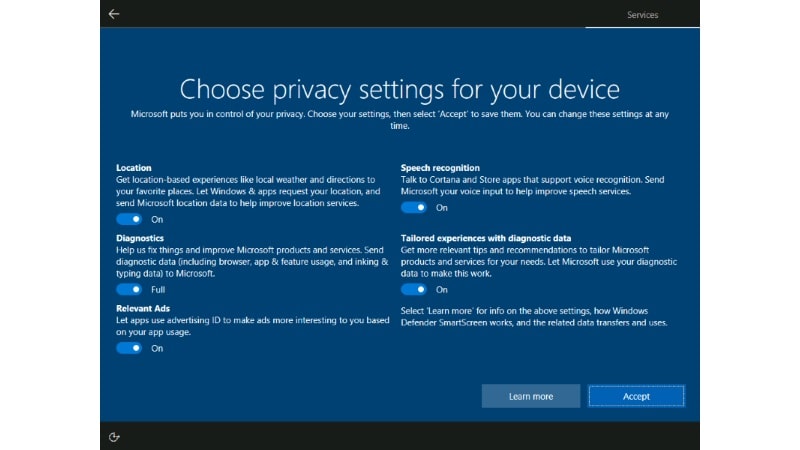 Coming to the new privacy controls that will be offered with the Creators Update, users will be getting the toggle options to choose whether they want to share their location, speech recognition data, diagnostic information etc. For those users who are installing Windows 10 for the first time or doing a clean install, the "Get going fast" and "Customize settings" screens will now be replaced by the privacy settings screen that will show the recommended settings by Microsoft but give users option to customise the settings as per their requirements.

On the devices running Windows 10 Mobile, the only key difference is that "the 'Tailored experiences with diagnostic data' setting is automatically turned off for all customers and is not presented as an option on the privacy screen due to limitations of the mobile platform," Rogers said in the post.

Interestingly, the company has also announced that it will be bringing voice data to Microsoft privacy dashboard.

These measures by the company, along with the introduction of web-based privacy dashboard and Windows Defender Security Center, seem to indicate that Microsoft doesn't want any stones left unturned to assure its customers of user privacy. We will have to see how the company addresses the privacy concerns going ahead as it has said that it will "ensure Windows 10 is compliant with the European Union's General Data Protection Regulation."