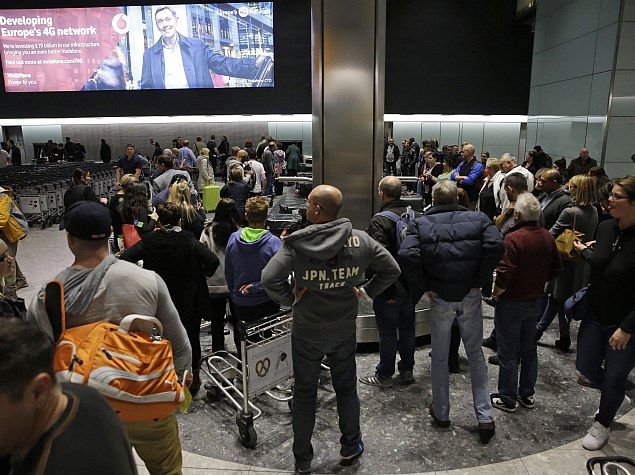 The British government has demanded an investigation after a computer failure Friday at one of Britain's two air traffic control centers caused a major disruption of air traffic into and out of London.

The congested airspace over the British capital was closed during the 35-minute shutdown, leading to severe delays and flight cancellations in London and other parts of Europe that officials said would spill over into Saturday.

The problem was traced to the computer system at NATS, the troubled U.K.-based air traffic management company, which has experienced a number of operational problems related to computer issues.

British officials seethed over the system meltdown on a busy Friday afternoon during the run-up to the holiday season, when travel demand is particularly high.

"Disruption on this scale is simply unacceptable and I have asked NATS for a full explanation of this evening's incident," Transport Secretary Patrick McLoughlin said.

NATS said a computer problem at its center in Swanwick, England, had touched off troubles in the system. After it was fixed, NATS said its operations were returning to normal but would not say how long that would take. It said "further information" about the cause would be released when it becomes available.

Problems were particularly acute at London's Heathrow Airport, Europe's busiest. Some 66 flights were cancelled there as of 6 p.m. (1 p.m. EST), with more expected, since planes and flight crews were out of position.

British aviation authorities did not ask the U.S. Federal Aviation Administration to hold flights destined for Heathrow on the ground during the shutdown, so there was no impact on departures from the U.S., said FAA spokeswoman Laura Brown.

Planes headed for the U.S., however, were held on the ground, unable to take off safely.

Heathrow officials urged passengers to check the status of their flights before leaving for the airport. Airlines issued the same cautionary advice.

The NATS center at Swanwick has been plagued by problems since it opened in 2002 - six years late and at twice its anticipated cost. Software and reliability issues have caused repeated disruptions since.

A few months after it opened, the BBC cited an unidentified air traffic controller as complaining of "potentially catastrophic" problems at the facility, including erratic radio transmissions. Other controllers cited by the broadcaster said the text on their computer screens was "too tiny to read."

In 2004, Swanwick was in the news when a computer problem grounded scores of flights across Britain. An even more serious glitch in September 2008 grounded hundreds of flights and affected tens of thousands of travelers.

In December 2013, another computer problem at Swanwick took 12 hours to fix, causing severe delays at the outset of the holiday season.

At the time, NATS chief Richard Deakin called the failure a "one-in-10-year event."

The malfunction Friday was repaired much more quickly, but it still led to significant delays felt throughout Europe and delayed flights bound for the United States.

The substantial problems triggered by the relatively brief malfunction illustrate how vulnerable the modern air traffic control system is to any type of breakdown.

John Potter, an expert with the Strategy& professional services company, said: "The grounding of hundreds of scheduled flights because of a technical problem at Swanwick highlights how reliant the airline industry has become on technologies which can and do fail."

Martyn Thomas, a visiting professor of software engineering at the University of Oxford who had examined NATS computer failures in the early 2000s, said the systems in place are not up to date.

"Some of NATS' computer systems are very old - the National Airspace System (NAS) that performs flight data processing is software that dates from the 1960s," he said in a statement. "Interfacing new systems to this old software can create difficulties."

Thomas said NATS has an outstanding safety record but once controllers lost their computer-based tools, delays were inevitable "because without the tools, the controllers cannot handle as many simultaneous aircraft."

The shutdown, which began at about 3:27 p.m. and ended at 4:03 p.m., affected London's five commercial airports: Heathrow, Gatwick, City, Stansted, and Luton.

Heathrow alone handles about 1,200 to 1,400 flights a day, some 200 of those to and from the United States, according to the flight tracking service FlightAware, which said Friday's problem most directly affected departures from London.

Federica Ceresa, 34, was returning home after a business trip to France. Her flight to London was scheduled to land about 3:30 p.m. - just about the time the computer issue began.

The pilot of her British Airways Flight 368 at first told passengers the plane would be going to Paris instead. Then he said they were going to Brussels. They were just about to land there when the plane was, fortunately, re-routed back to its original destination - London.

"There was clapping of hands," she said brightly.

Even though her 90-minute flight took about four hours, she wasn't too upset. She saw many passengers waiting to re-book flights as well as the eerie sight of an empty departure lounge. She felt quite lucky.

"Now I can go to Friday drinks!" she told an Associated Press reporter.