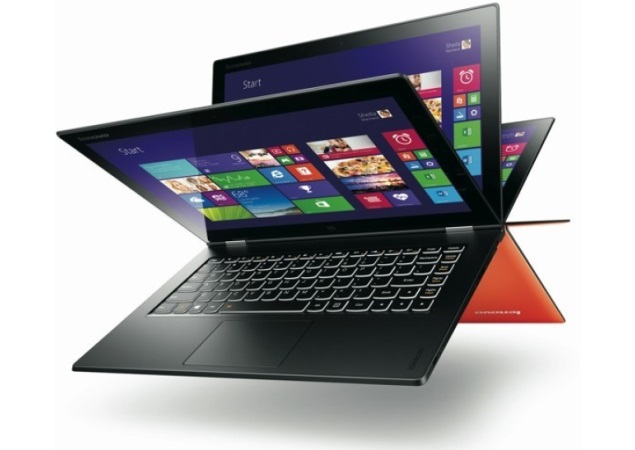 Hot on the heels of the announcement of the new Vibe X smartphone and the S5000 tablet, Lenovo has also launched the Yoga Pro 2 and ThinkPad Yoga at the IFA 2013.

Yoga 2 Pro carries the legacy of the original Yoga that created quite a buzz with its full 360 degrees flip back screen. The Yoga 2 Pro laptop comes with the four modes of operation - laptop, tablet, stand, and tent, just like the original Yoga. The Yoga 2 Pro features a 13.3-inch QHD+ display with 3200x1800 pixels resolution. Its 350-nit display features a 178 degree wide angle view. It is 15.5 mm thin and weighs about 1.39 kilogram. The laptop is backed with fourth-generation Intel Core i7 U series processors and is based on Windows 8.1.

Yoga 2 Pro comes with 512 GB SSD (Solid State Drive) with 8GB of RAM and features Intel WiDi for streaming content wirelessly to a TV. The laptop can deliver up to nine hours of battery life. It comes with backlit keyboard and will be available in its signature Grey or Clementine Orange colour. The Yoga 2 Pro sports stereo speakers with Dolby Home Theatre and Dual Array Digital Mic.

On the other hand, the ThinkPad Yoga comes in two display models - Corning Gorilla Glass HD IPS display or a full-HD IPS display both featuring a 12.5-inch screen. It runs on Windows 8.1. The laptop is powered by Intel fourth-generation Core i7 processor with up to 1TB of storage.

The company has announced that Lenovo Yoga 2 Pro will come with a price tag of $1,099.99 and will be available beginning in October while the ThinkPad Yoga will come at $949 and will hit stores in November.