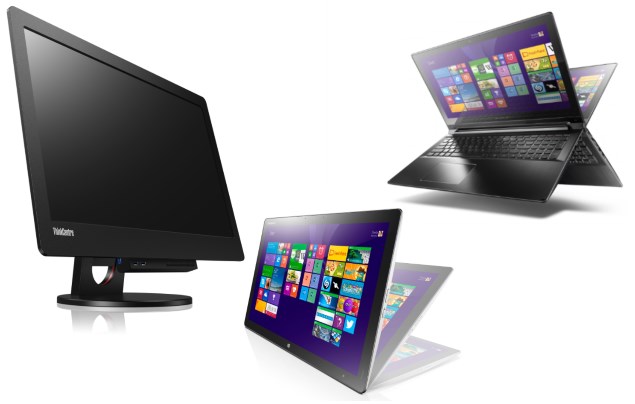 Lenovo has launched yet another set of products at the ongoing IFA 2014 trade show in Berlin. The announcements include new PCs in a variety of form factors for use both at the office and at home.

The new Lenovo ThinkPad Helix is a 2-in-1 product aimed at business users. It weighs 1.35kg and is 9.65mm thick. It is 15 percent thinner than the previous ThinkPad Helix model and supports pen input but users can also choose between a standard detachable keyboard base or the Ultrabook Pro Keyboard base for extended battery life.

The new device is based on the newly announced Intel Core M processor and has a premium finish with an aluminium finish. It can be used in any of five positions: tablet, stand, tent, laptop or desktop. The upper half with the 11.6-inch screen can be detached from the keyboard deck and reinserted the other way around. Lenovo promises "astonishing power efficiency and battery life".

Lenovo also announced the new Horizon 2s and Horizon 2e tabletop PCs. The 2s is a slim model which the company says will be easy to carry from room to room, while the 2e is more budget-friendly. Both models are based on 4th generation Intel Core processors and supprt Blluetooth 4, NFC, Dolby Home Theater sound, and up to 3 hours of battery life when streaming HD video.

Both models will come with Lenovo's Aura multi-user interface for family sharing, as well as over 40 games and education applications. The Horizon 2e will start at $749 (approximately Rs. 45,225) when it goes on sale.

Lenovo describes the new The ThinkCentre Tiny-in-One 23 as the "world's first modular all-in-one desktop for business". Users can choose their own ThinkCentre Tiny PCs and match them with the monitor dock, allowing for a simple upgrade path while still saving space and reducing clutter. The TIO has a 23-inch Full HD screen, USB 3.0 ports in front, optional optical drive, and height-adjustable stand. The product is aimed at offices, educational institutions and government installations.

The Edge 15 is Lenovo's thinnest and lightest ever dual-mode consumer laptop at less than one inch thin and weighing approximately 2.3kg. It is built in a premium aluminium chassis has a 300-degree hinge as well as a backlit keyboard. The device is powered by a 4th generation Intel Core processor and has a 15.6-inch Full HD screen powered by optional Nvidia GeForce GT840M graphics. Lenovo claims 8 hours of battery life and a choice of hard drives up to 1TB or solid-state drives up to 256GB.