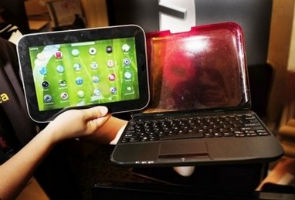 Lenovo's PC shipments in China grew 22.7 percent year-on-year during the quarter, more than double the industry growth rate. That, combined with its diversification plans, has analysts forecasting it could overtake market leader Hewlett-Packard Co as soon as next year.

"Even though China's economy is slowing down, it's still ahead of the U.S. and Europe, so it will continue to be the driver for Lenovo to get to be the world's No.1, a position it should be able to achieve," said Arthur Liao, an analyst with Fubon Securities in Taipei.

Lenovo posted a net profit of $472.99 million for the fiscal year ended March, it said, versus a consensus forecast of $472.2 million from a poll of 29 analysts by Thomson Reuters I/B/E/S.

The PC maker recorded a net profit of $273.236 million a year earlier, it said in a statement posted on the Hong Kong stock exchange.

That meant Lenovo earned $66.8 million for the fourth quarter versus a consensus forecast of $66 million, based on a Reuters' calculation using unaudited nine-month financial data.

Lenovo's results stand in contrast to Dell inc, the world's No.3 PC maker, which posted disappointing quarterly results on Tuesday and forecast a 2 to 4 percent revenue gain in the coming fiscal quarter to $14.7 billion to $15 billion, short of the $15.4 billion Wall Street had been expecting.

The reason Lenovo is outperforming Dell is because Dell is focused on high-margin products while Lenovo is aiming for volume sales to gain market share, said Jonathan Ng, an analyst with CIMB Research in Singapore.

Strong home market
China is Lenovo's stronghold, accounting for 42 percent of total revenue, while mature markets such as Japan and Europe make up another 42 percent. Emerging markets account for the remaining 16 percent.

Operating profit in China grew to $552 million during the fiscal year and the operating margin was up 0.1 percentage point year-on-year to 4.5 percent, the company said.

"The China PC market grew by 13 percent year-on-year during the fiscal year and became the largest PC market in the world," the company said in its statement.

The company said its smartphone market share in China reached 9.5 percent in the fiscal quarter four and its tablets had a dominant position of about 50 percent of the Android market in China.

The ability of Lenovo to cross-sell consumer products and business products "should sustain higher PE multiples for Lenovo, reflecting the ability to expand its portfolio beyond the PC space in China," JPMorgan said in a note before the earnings release.

Lenovo had a worldwide market share of 13.4 percent in the first quarter, lagging HP's 18.0 percent, but ahead of Dell's 11.6 percent, according to research firm IDC.

However, sales of its Lepads and Lephones still lag foreign leaders such as Apple Inc and Samsung Electronics Co Ltd, as well as local rivals Huawei Technologies Co Ltd and ZTE Corp.

In China, Apple still dominates the tablet market with a more than 70 percent market share, with Lenovo coming in a distant second with a single-digit share.

In May, Lenovo launched a smart TV in China in hopes of satisfying increasingly demanding consumers who prefer to play games and watch movies online on bigger screens.

Since the beginning of this year, Lenovo shares have climbed about 30 percent compared with the Hang Seng Index's 1.6 percent gain.