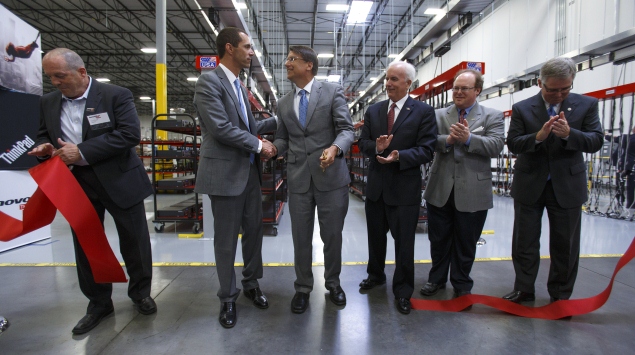 Lenovo expects to finish hiring 115 production workers by the end of June at the manufacturing operation that opened in January inside an existing distribution center in Whitsett. The company on Wednesday celebrated the US production line small compared to its sites elsewhere.

"The reason that we're doing this and have made this decision is because we believe it can bring us some advantages in this marketplace," Lenovo North America President Jay Parker said in an interview.

Lenovo, the world's second largest PC maker behind Hewlett-Packard, is based in China but has executive headquarters in Morrisville, where about 2,000 work. The company bought IBM's PC business there in 2005.

Lenovo's site along Interstate 85, a major East Coast transportation corridor, is about 40 miles (65 kilometers) from the personal computer factory that Dell opened in 2005. The plant's workforce peaked at 1,400 employees but it closed in 2010 after Dell recognized customers were turning away from desktop computers for more mobile devices.

The addition of production to an existing Lenovo distribution and returns center has been called an example of onshoring or reshoring a move by manufacturers to reverse the decades-long trend of transferring production to low-cost countries overseas. Parker made it clear that Lenovo's North Carolina operation fills some important niches.

The Whitsett site's output of ThinkPad laptops, commercial desktop computers, and - by end of 2013 tablets and servers is expected to ramp up to several hundred thousand units a year, Parker said. The rest of the approximately 7 million Lenovo devices sold each year in the US and Canada would continue to be shipped from factories in Mexico, China and elsewhere, he said.

US production means faster product delivery for customers that demand it, Parker said. The new factory also allows Lenovo to wait until late in the production cycle before customizing devices, for example with cover etchings or tags that help companies and universities keep track of their property, he said. Governments and some other customers want or require products they buy to be built in the USA, he said.

"Those make a business case for us to put this facility here," Parker said. "The fact is, the costs are still higher (than overseas). It's an investment for us. Essentially we've decided that there's a business case that can be closed because we have a competitive advantage here."

The Lenovo plant represents a larger fact about how US manufacturing competes against lower-wage countries, said Terri Helmlinger Ratcliff, executive director of North Carolina State University's Industrial Extension Service, which connects manufacturers with the school's resources. Factories in the US must turn "from mass manufacturing of the same product to mass customization," she said.

That means fewer people and more automation, Helmlinger Ratcliff said, "which is driving us toward a workforce that looks very different."

Lenovo said in May 2013, its sales of desktop and laptop PCs both declined 2 percent in the latest quarter, but profit rose 90 percent as sales of smartphones and mobile computing technology expanded.

The company sees continuing growth in North America on top of an already strong presence in Asia and Europe, Parker said.
Comments