At CES 2017, Lenovo launched a series of products in different categories. It bet big on IoT and launched smart home assistant, smart glasses, and even a smart storage system. Furthermore, it also introduced a sub-brand called Lenovo Legion dedicated only to gaming PCs and launched two new laptops made with the feedback received from the gaming community. To further its gaming efforts, Lenovo also unveiled its first ever VR headset that intends to work with the Windows Holographic program as well.

The Lenovo Legion laptops are targeted mainly at gamers, and they look to offer good graphics performance, powerful processors, and efficient cooling systems. The first two laptops to flag off the series include the Lenovo Legion Y720 and Legion Y520.

Lenovo Legion Y720
The Lenovo Legion Y720 laptop is powered with up to seventh generation Intel Core i7 processors and Nvidia GeForce GTX 1060 with 6GB of GDDR5 video RAM, making it VR compatible as well. The laptop sports a 15.6-inch UHD (3840x2160 pixels) or full-HD (1920x1080 pixels) IPS display with anti-glare for gamers who prefer playing outside. It is touted to be the world's first laptop to come with Dolby Atmos technology for superior audio quality. The laptop offers support for the Xbox One wireless controller, and comes with an optimised thermal cooling system for keeping the laptop in normal temperature during intense game fights. The Lenovo Legion Y720 laptop offers up to 16GB of DDR4 RAM, and you can customise with it 128GB, 256GB, 512GB of SSD storage, or 1TB, 2TB of HDD storage. Lenovo claims that the laptop offers five hours of battery life and weighs 3.2kgs. Connectivity options include the fast Thunderbolt 3 port. The Lenovo Legion Y720 laptop starts at $1,399.99 (roughly Rs. 95,700), and will be available sometime in April.

Lenovo Legion Y520
The Lenovo Legion Y520 laptop comes with a 15.6-inch full-HD (1920x1080 pixels) IPS display with Anti-glare as well. It is also powered by up to seventh generation Intel Core i7 processors and up to a Nvidia GeForce GTX 1050 Ti graphics card. It offers the same storage and memory configurations as the Y720. The laptop comes with two Harman speakers for good audio quality, and weighs only 2.4kg. Both the laptops come with backlit keyboards for ease in gaming in the night as well. The Lenovo Legion Y520 laptop starts at $899.99 (roughly Rs. 61,500), and will be available sometime in February.

Lenovo VR Headset
Lenovo even ventured into the VR segment, and demoed its first ever VR headset for all attendees to experience. The company has not announced any shipping details of the headset, but it will be priced less than $400 (roughly Rs. 27,400) whenever it arrives, reports Engadget. The design of the headset is such that the lens rests on your forehead instead of the nose. It uses two 1440x1440 pixels OLED panels for display, and the company looks to make it really lightweight, when compared to the Oculus Rift or HTC Vive. Importantly, the Lenovo VR headset will work with Microsoft's Windows Holographic Program. 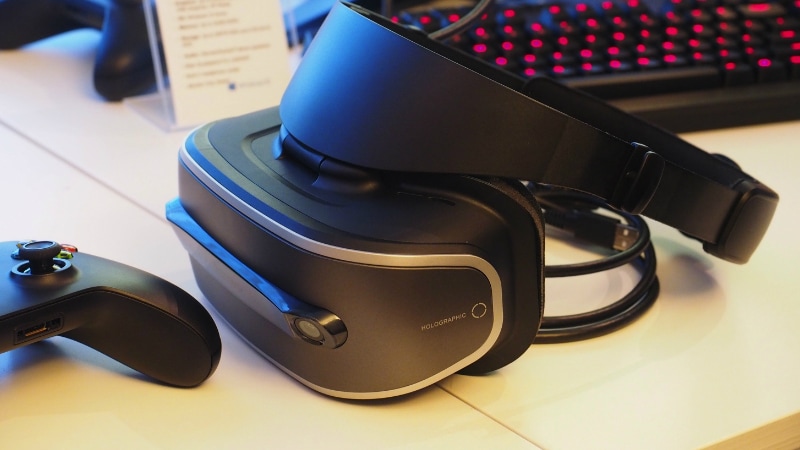 Lenovo ahead of CES 2017 also launched the Thinkpad X1 Carbon, Thinkpad X1 Yoga, and the Thinkpad X1 Tablet as well. It also refreshed the Miix series with 12-inch Miix 720 tablet running on Windows 10. The Miix 720 comes with a detachable keyboard and a fold out kickstand for multi-purpose usage. All of these products will hit the market before April.