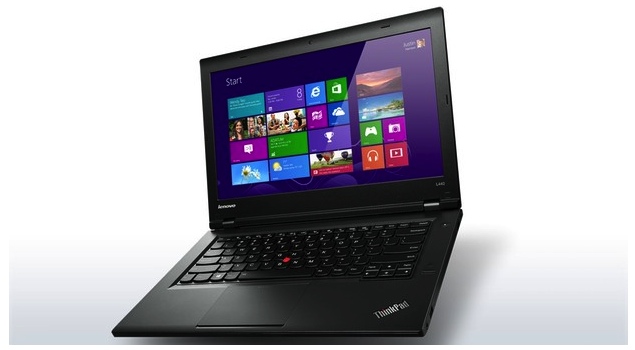 Lenovo has used the Intel Developer Forum to announce a refresh to its lineup of ThinkPad business notebooks including products in the ThinkPad T, W, E and L Series of laptops. The Chinese device maker has upgraded these notebooks with new fourth-generation Intel Core (Haswell) processors, as well as improved graphics, among other features.

In the ThinkPad T-series, Lenovo has introduced the T440p and T540p notebooks that are powered by up to Intel quad-core i7 processors. The T440p and T540p claim to offer a battery life of up to 13.7 hours and up to 12.6 hours, respectively.

The notebooks offer Nvidia GeForce GT730M graphics on select systems and up to 16GB SDRAM. These come with the option of Solid State Drives (SSD) and Hard Disk Drives (HDD) of up to 1 TB. Connectivity options include 4G/ LTE along with mini-DisplayPort, a VGA port, 4 USB 3.0 ports and an SD Card reader.

Lenovo has also launched the ThinkPad W450 which it says is its most powerful and mobile workstation ever. The notebook sports a 15.5-inch 3K IPS panel with a 2880x1620 pixels resolution and wide viewing angles. The notebook is 27mm thick and weighs  5.45 pounds or 2.47 kgs.

The notebook is powered by the latest Intel quad-core i7 processors, come with up to 32GB of RAM and sport the ThinkPad Precision backlit keyboard with a number pad.
The W450 comes with Nvidia Quadro graphics with Optimus 2D and 3D content creation. The notebook offers storage options of up to 2TB with RAID options for data backup and protection.

The device also sports a Thunderbolt port for high speed data transfer. The notebook includes a full array of ports and connectivity options such as 4G/ LTE.

Lenovo has also launched L440 and L540 entry-level business notebooks. Powered by Intel's fourth-generation Core processors, the L-Series notebooks feature vPro technology and are optimised for easy integration into new or existing IT infrastructures, as per Lenovo.
Both the ThinkPad L440 and L540 include Wi-Fi, Ethernet and 4G/LTE connectivity. The notebooks offer dual HD noise cancelling microphones. These come with an HD+ camera on the L440 and a full-HD one on the L540, and are Microsoft Lync Certified for making video calls and conferencing.

The company has also launched new notebooks in the ThinkPad E-series lineup, with the ThinkPad E440 and E540. These notebooks feature a new thinner, lighter, and elegant design and are powered by the latest fourth-generation Intel Core Processors. The notebooks come with up to Quad Core Intel Processors, optional Nvidia discrete graphics, storage up to 1TB, RAM up to 16GB, and an optical drive.

The Windows 8 optimised notebooks feature up to 14-inch HD+ and 15.6 inch full-HD antiglare displays with touch screen options and larger gesture trackpads. In addition to these, the E-series notebooks come with new multi-function noise cancelling microphones, the ability to switch between conference mode or single voice mode and Dolby Advanced Audio.

Nokia Lumia 925 now available on EMI
LG D820 could be the next Nexus phone after all: @evleaks