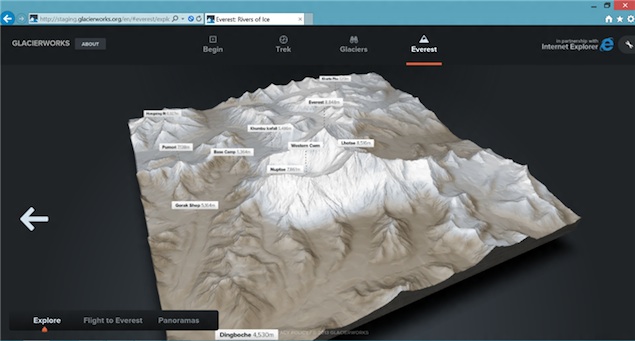 Microsoft has released a developer preview version of Internet Explorer 11 (IE11) for Windows 7.

As promised by the Redmond giant after it released the consumer preview version of Windows 8.1 with the new iteration of the browser last month, the browser can be downloaded from Microsoft's Window's website.

According to Microsoft, IE11 is the first browser to natively decode JPG images in real-time on the GPU (Graphics processor), that allows web pages to load faster and use less memory, reducing power consumption and improving battery life of devices. IE11 also boasts of being the first browser to render text on the GPU. Microsoft also claims that the updated version of Internet Explorer is the first browser to implement the W3C Resource Priorities standard allowing developers to specify which parts of the page are important and need to be loaded first. It also supports HTML5 link prefetching and pre-rendering, letting developers guide the browser anticipate where users are expected to go next and get those pages ready.

The update brings some under the hood changes including support for hardware accelerated 3D web graphics with support for WebGL. It also supports plug-in free HTML5 video and the latest standards for closed captioning, adaptive streaming, wherein the quality of the video is adjusted depending on the available bandwidth, and rights management.

Microsoft has also made improvements to its JavaScript engine, Chakra with Internet Explorer 11.

According to the company, IE11 on Windows 7 is 4 percent faster than IE10, and nearly 30 percent faster than Chrome in JavaScript benchamark tests like SunSpider.
IE11 also features a completely overhauled suite of in-browser F12 developer tools. These tools help Web developers diagnose and optimize their apps quickly and efficiently, a sper Microsoft.

The browser's Windows 8.1 avatar offers additional features optimised for touch-screens including  swipe gestures for going forward and back and supports Windows 8.1's side by side mode allowing users to browse two websites on different instances of the browser on one screen.
As with any preview software, users are advised not to use the software as their primary browser, as it's likely to have some bugs.
Comments

Zynga woes deepen as it loses money and players
Samsung to invest in chips, panels as smartphone growth slows