When Intel launched the first two processors based on the new Skylake architecture at Gamescom a few weeks ago, it didn't share much information about what's new and why they are faster or better than their predecessors. The enthusiast-oriented Core i7-6700K and Core i5-6600K are only the tip of the iceberg though; Intel will launch many more models across price tiers and device segments over the next year.

While details such as speeds and specifications of individual SKUs have not been made public, Intel did share a whole lot of information about the architecture as a whole at the annual Intel Developer Forum this week. Over the course of several technical briefings, we were able to build a high-level overview of what Skylake (formally known as the sixth-generation Core architecture) does differently and what users can expect.

This overview paints a picture of a hypothetical Skylake processor with a superset of all possible features. Diagrams shown do not represent any actual product. It is likely that there will be models that do implement a majority of these features, if not all, but we do not know at this point how Intel will differentiate products at different tiers in its hierarchy. 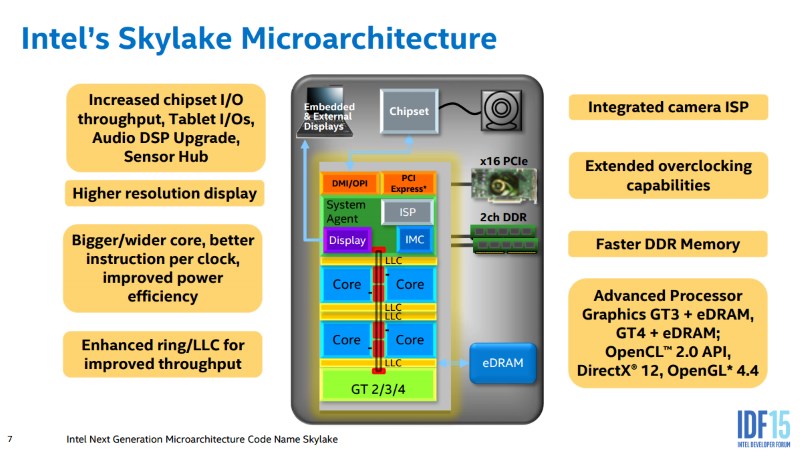 First of all, Skylake has been designed with a much wider range of target devices in mind than any previous generation. There is a 20x scale in terms of TDP, which represents power consumption and heat output. At one end of the scale, there will be 4.5W parts for ultralight tablets - these will succeed the current products in the Core M lineup. At the other extreme will be 91W parts, such as the two already launched.

With tablets and other portable form factors in mind, another big change this generation is the incorporation of IO (Input and Output) functionality that has not been integrated into processors before. Key amongst these is a camera ISP (Image Signal Processor) that can handle up to four 13-megapixel cameras (but only two simultaneously). That might seem excessive, but stereo imaging is key to Intel's RealSense efforts. 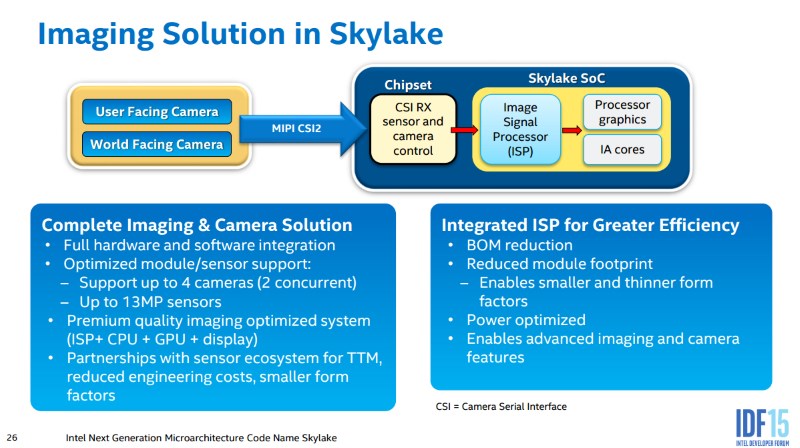 4K video recording at 30fps or 1080p at 60fps will be supported. Camera capabilities will include face detection and recognition, still capture during video recording, concurrently recording two video streams, zero-lag burst captures, and HDR. ISP integration reduces the cost and complexity of designing devices, while getting smaller and smaller.

Power reduction has been at the forefront of CPU development for years, and Skylake takes things a step further by dedicating separate fixed-function logic for tasks such as 4K video decoding, streaming, and transcoding. New formats that can be accelerated include HEVC, AVC, SCc, VP8, and MJPEG. This allows the bulk of the CPU to stay idle while performing an otherwise stressful task, reducing power draw. Beyond that, power gating is even more granular than before. Very specific parts of the CPU can be turned off when not required.

Intel reminded us that all power savings are the result of better efficiency in the architecture, since Skylake is not based on a new, smaller manufacturing process. By pushing more instructions through per clock cycle and further reducing occasions when the CPU is waiting for data from a cache or main memory, the CPU can do its work and switch to a lower power state sooner. 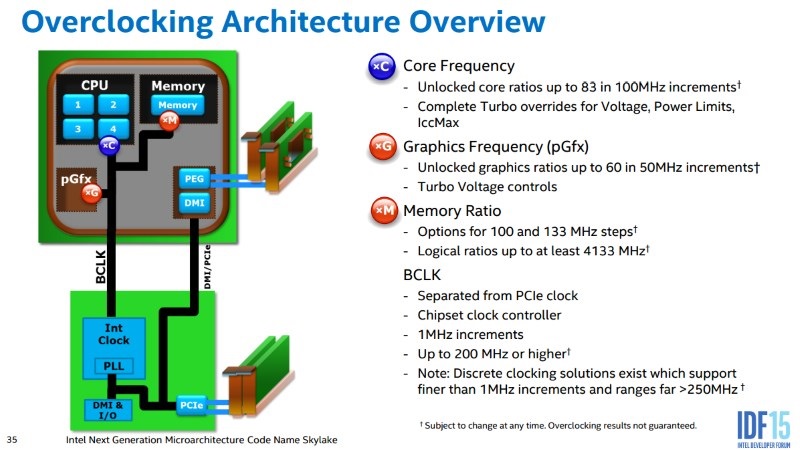 In another first, Skylake processors will take over the duty of deciding when to switch between power states, which has until now been handled by the operating system. Intel calls the new technique SpeedShift, which it says will allow it to switch states more rapidly, providing processing power on demand but also shutting things down with more agility.

Not all improvements cater to the low-power end of the spectrum. Intel has taken into consideration the needs of enthusiasts and overclockers. The highest-end K-series CPUs (and possibly some others) allow for very fine-grained voltage and frequency adjustments. The base clock has been liberated from being tied to the strictly controlled PCI Express bus clock, and can be pushed in 1MHz increments. There are independent multipliers for the processor, memory and graphics units. DDR4 memory can be pushed to up to 4133MHz. 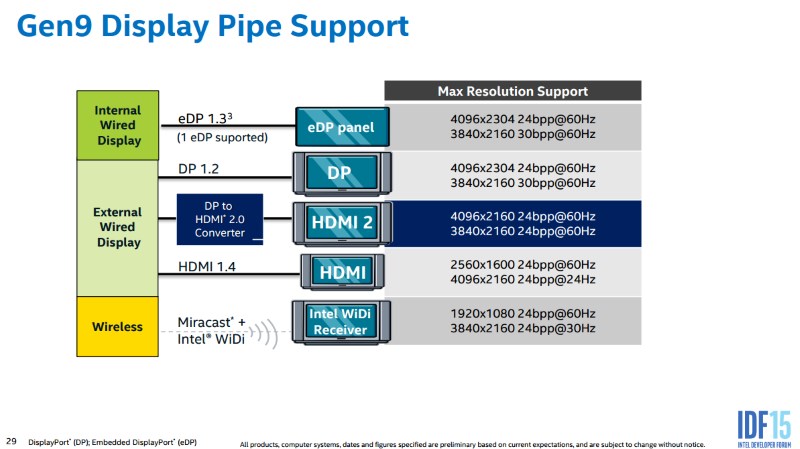 There's also good news on the graphics front - the 9th-generation integrated graphics logic will support DirectX 12, Vulkan, OpenCL 2.x and OpenGL 5.x. Laptops will be able to drive 60Hz 4K displays using just the integrated graphics. Devices will be able to drive displays of up to 4,096x2,304 at 60Hz over DisplayPort, or lower resolutions over HDMI.

Intel will use dedicated embedded DRAM across more of its lineup instead of reserving it for top-tier CPUs with Iris Pro graphics. There's also a difference in the way it is implemented; rather than being effectively a fourth-level cache, it will act as a fully coherent memory space that can be allocated for any purpose. Intel says that its graphics driver will decide what data is available in the eDRAM, which might including data not traditionally considered worth keeping within the processor's caches. 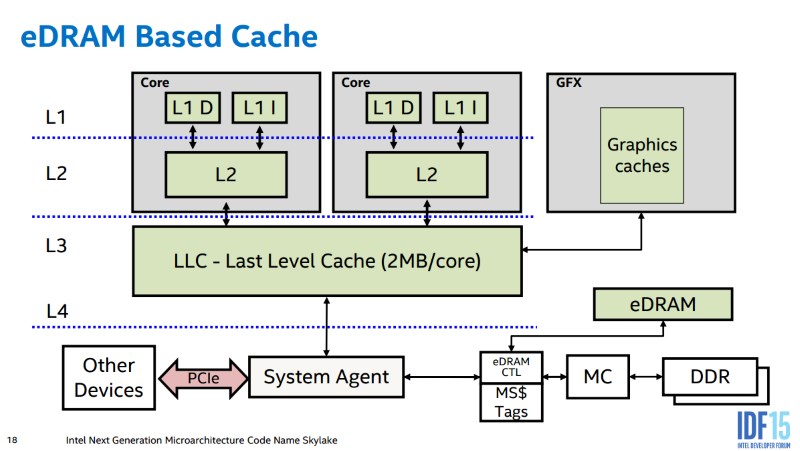 There are new functions which aim to improve platform security. SGX, or Software Guard eXtensions which allow for the creation of "enclaves" in which data cannot be accessed by any running process other than the one that created it. According to Intel, not even processor debugging tools will be able to retrieve code or data within an SGX enclave. This will protect against attacks that manage to get elevated OS-level permissions.

Undoubtedly, more information will become known after the formal Skylake launch. There's still much more that isn't widely known We hope to have much more insight into Intel's technology and strategy soon.