Intel continued its rollout of the 5th Generation Core processor family, formerly codenamed Broadwell, at CES today with the launch of 28 new low-voltage processors aimed at thin and light notebooks including 2-in-1 hybrid tablet products and Chromebooks. Several devices from all major manufacturers based on the new processors are expected to launch in the coming days and weeks. 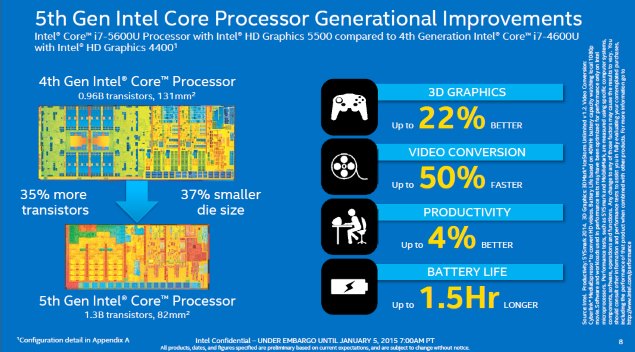 When compared to a four-year-old PC, Intel claims up to 2.5x productivity, 2x battery life, 9x faster waking from sleep, 12x better 3D graphics and 8x faster video conversion. The company hopes a wave of upgrades will replace PCs and notebooks of similar age which are currently in use around the world.

Intel is especially bullish about its new processors' integrated GPUs and the combined effects of all its new technology on notebook battery life. Devices based on 5th Gen Core processors will also support natural interactions such as voice commands and 3D gestures.

Intel will continue rolling out processors including higher-TDP SKUs for desktop users and high-performance enthusiasts over the course of 2015.