Intel has formally taken the wraps off its highly anticipated new line of Core CPUs featuring Radeon Vega graphics processors integrated onto the same physical package. Intel first announced its collaboration with AMD in November 2017, confirming months of rumours. Details of one such CPU model were inadvertently published on Intel's own website last week before being taken down, and now we know that there will be five models in total, aimed at both laptops and desktops.

Dell and HP will be the first to launch new 2-in-1 laptops using these processors, but specifics will only be known when the respective companies do their own unveilings. Other companies will be announcing more products in early 2018. Intel has also launched a new line of its own compact NUC PCs featuring the new processors and aimed at gamers. 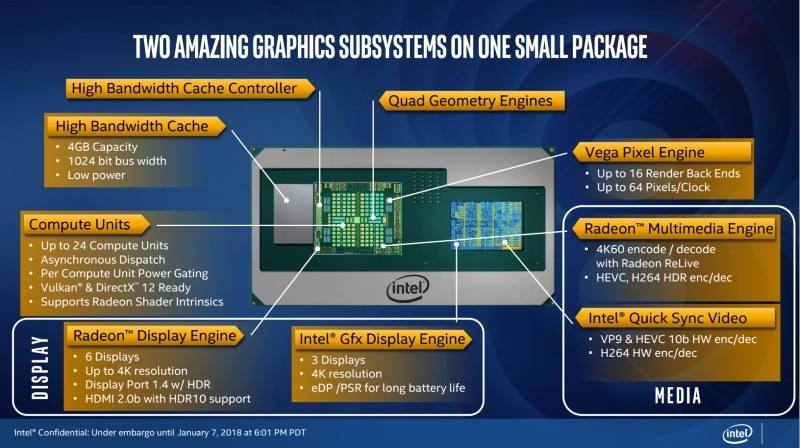 The CPUs will form a new 'G' series within Intel's product stack, and will be marketed as 8th Gen Core processors with Radeon RX Vega M Graphics. Of the five new CPUs, two have 100W thermal ratings and are designed for desktop systems, while three have 65W ratings and are intended for high-end laptops. All five have Radeon Vega GPUs on the same physical package, behaving just like a discrete GPU. In addition, the Intel HD Graphics 630 logic is still a part of the processor die and will take over when a powerful GPU is not required.

At the top end is the Core i7-8809G which was revealed early by Intel. All the leaked specifications have been confirmed, including the fact that it is fully overclockable. It has base and boost clocks of 3.1GHz and 4.2GHz respectively. It will be joined by the non-overclockable Core i7-8709G which has the same base clock but a slightly lower 4.1GHz boost clock. Both have four CPU cores with Hyper-Threading, and 8MB of cache. Both also feature the Radeon RX Vega M GH GPU which has 24 compute units comprised of 1536 stream processors, running at between 1063MHz and 1190MHz. 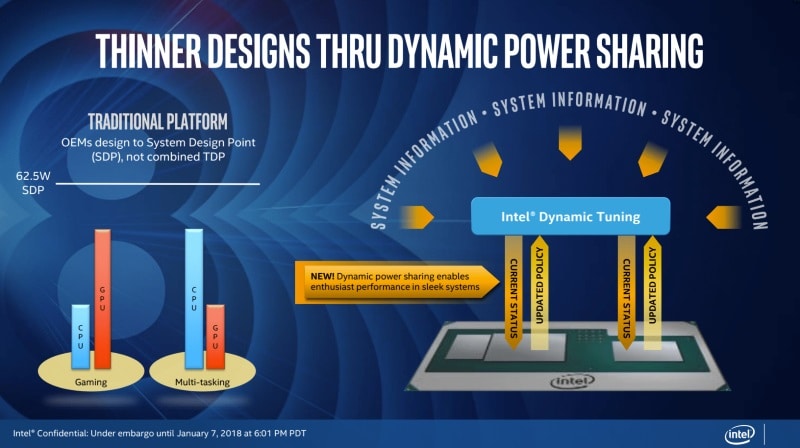 The last new processor is the Core i7-8706G which is identical to the Core i7-8705G, but is the only one of the five to support Intel's vPro technology for business-class remote management and security features.

Both variants of the Radeon Vega M GPU have 4GB of high-speed HBM2 memory connected via a 1024-bit bus. The GPU itself is connected to the CPU cores using eight dedicated PCIe 3.0 lanes. Both GPUs will be able to support six independent 4K displays through the Radeon GPU and three additional displays through the Intel GPU. All features of AMD's Radeon Software Adrenalin Edition driver are supported, including Radeon Chill for efficiency, Wattman for GPU overclocking, Radeon ReLive for screen recording, and Freesync for variable refresh rate displays.

While the 100W and 65W TDP figures represent the maximum possible heat dissipation under load, the Radeon GPUs will be able to shut down completely when not required, but the Intel CPU might run at lower speeds when the GPU is making better use of the thermal envelope. According to Intel, laptop manufacturers will also be able to tweak the power management balance in order to suit the designs of their products.

All five new processors support two channels of DDR4-2400 RAM. The fact that all CPUs are quad-core and use Intel HD Graphics rather than Intel UHD Graphics indicate the use of the same Kaby Lake Refresh architecture underpinning Intel's U-series laptop CPU models that were launched last year.

Despite being aimed at desktops, the 100W models will only be available as BGA (Ball Grid Array) packages, which means that they will be soldered directly on to motherboards. They will not fit into sockets, which means there will be no standalone retail CPUs. There will be new badges for PCs and laptops identifying the Radeon RX Vega M GPUs, though the AMD brand is nowhere to be seen. 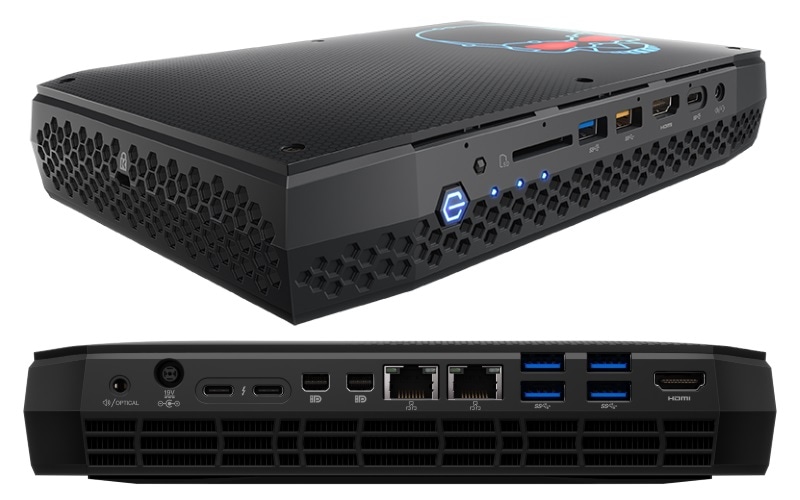 The joint effort between historic rivals Intel and AMD creates a whole new class of consumer CPUs. Intel says that there is a 50 percent reduction in the silicon footprint compared to using fully discrete CPUs, GPUs and VRAM, allowing for bigger batteries within laptops the same size. This could help both companies inject fresh life into a struggling PC ecosystem, as well as take on common rival Nvidia.