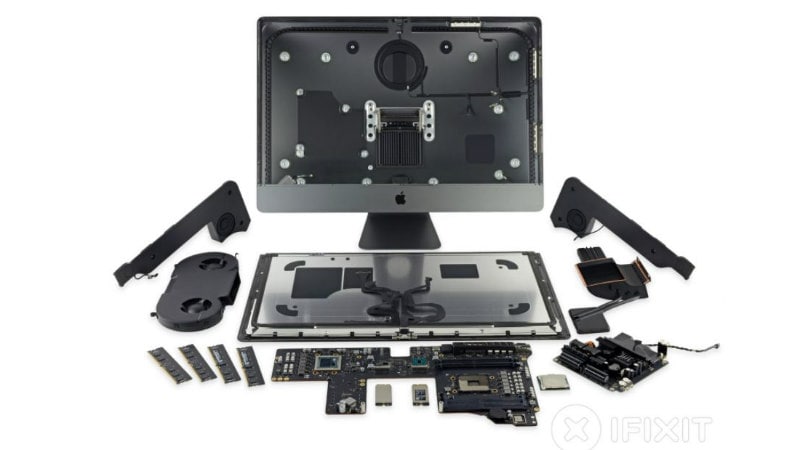 While Apple is yet to launch the iMac Pro in many markets including India, DIY repair authority iFixit has brought a detailed teardown to reveal the internals of Apple's latest all-in-one. The iFixit teardown shows the cooling setup that helps the iMac Pro maintain its temperature while keeping it quiet. The teardown also highlights the way how Apple has mingled the two SSD units of the premium iMac. Launched last month, the iMac Pro comes at a starting price of Rs. 4,15,000 ($4,999 in the US).

The iFixit teardown at first picked out the dual-fan cooler from the Apple iMac Pro that takes the space of a hard drive. The new cooling solution is claimed to have 80 percent increased cooling capacity than what was featured on existing iMac machines. Alongside better cooling results over its predecessors, the cooler enables the machine to work on performance-intensive tasks that wouldn't possible for the previously top-end 5K iMac. It also keeps the built-in 8-core Intel Xeon processor and Radeon Pro Vega 56 graphics cool.

After the ultimate cooler, the teardown moves to the RAM. The iFixit team has spotted that the iMac Pro has a standard 288-pin DDR4 ECC RAM slot. Further, the engineers at iFixit were able to upgrade the available RAM units on the iMac Pro, an option not available to end-users since the RAM slot is not user accessible, and after-market upgrades are available only via Apple authorised partners. Tearing down the machine also shows the combination of two NVMe SSDs that is apparently manufactured by SanDisk.

The teardown process also shed some light on the difficulty in upgrading the custom-made Intel CPU that is packed with a single heat sink that also covers the GPU. Folks at iFixit states that the GPU is particularly soldered down to the logic board - limiting instances of its upgrade. However, the CPU is not soldered down and can be upgraded. Users need to check with the compatibility of the chip, though. The base variant of the iMac Pro is found to have the Intel Xeon W-2140B. Of course, like the rest of the iMac Pro, the CPU is not meant to be user-upgradable.

It was initially rumoured that Apple is adding the iPhone 7's A10 Fusion coprocessor to the iMac Pro to offer always-on Siri. The company didn't confirm any details about that coprocessor. But now, the iFixit team suggests it is a power management IC developed either by Apple or Dialog Semi. The mysterious IC accompanies the T2 chip, which is the successor to the T1 chip that was debuted on the MacBook Pro with Touch Bar in 2016.

The iFixit team also spotted the 500 Watt power supply that is manufactured by Taiwan-based AcBel Polytech. The teardown also reveals that the display of the iMac Pro is identical to the 5K display that was available on the 2017 5K iMac, particularly the LG Display model LM270QQ1. This means that Apple hasn't upgraded the screen - despite delivering the most advanced hardware on the newest iMac model.

The iMac Pro has received a low repairability score of 3 out of 10 on iFixit's meter. The team stated that the replaceability of key components requires many efforts, and loss of the external RAM access makes it difficult for users to upgrade the machine in the future. Further, since the GPU is soldered, there are no easy graphics upgrades possible for end users.