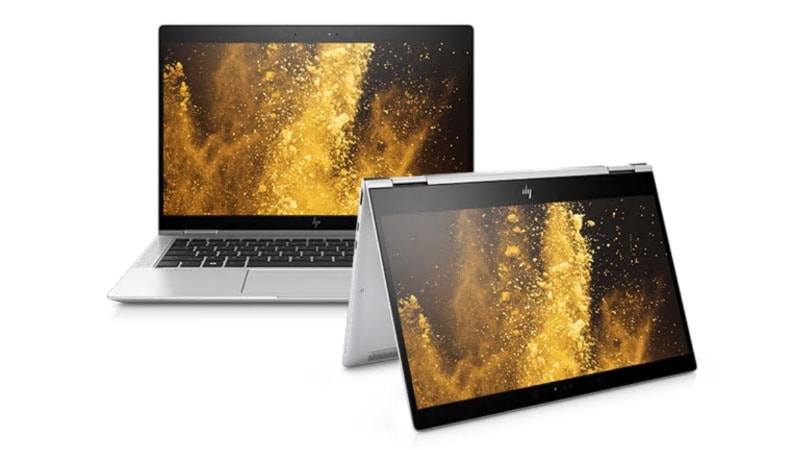 The HP EliteBook x360 1030 G3 that is claimed as the world's smallest business convertible with a starting weight of only 2.76lbs (nearly 1.25kg) and 15.8mm of thickness. Unlike the previous EliteBook x360, the new model has optional 4G Cat.9 LTE connectivity and an upgraded 13.3-inch display with anti-glare coating on top. The convertible is powered by up to eighth-generation Intel Core i7 processor and has the support to charge over USB Type-C. Further, there is an upgraded stylus pen that can be attached to the side of the machine. HP has also provided a proximity alert feature that notifies notify users when the pen is left behind. Besides, the EliteBook x360 1030 G3 has a full-HD (1080p) webcam and comes with 18 hours of battery life on a single charge. It will go on sale in the US in June with a starting price of $1,449 (approximately Rs. 97,900).

Unlike the EliteBook x360 1030 G3, the HP Elite x2 1013 G3 hybrid is claimed to be the world's smallest business detachable. The Elite x2 1013 G3 has a 13-inch thin-bezel display that comes in a 12-inch chassis and sports 700 nits of brightness. There is also an integrated HP Sure View privacy screen and optional 4G LTE connectivity. The detachable includes a keyboard cover that has quick launch shortcut buttons. Plus, there are optional Intel Quad Core vPro processors and a metal finish build that has passed MIL-STD 810G testing. The device also has fast-charging support to charge 50 percent battery in 30 minutes. HP will sell the Elite x2 1013 G3 in the US in June with a starting price of $1,499 (approximately Rs. 1,01,230).

For business customers seeking a new ultra-slim notebook, the new Elite series has the HP EliteBook 1050 G1 that has 18.9mm of thickness and features a 15.6-inch display along with HP Sure View protection. The notebook is powered by an eighth-generation Intel Core processors along with optional Nvidia GeForce GTX 1050 graphics and comes with an HP Privacy Camera that has a dedicated cover to block the lens of the built-in webcam. It is touted to deliver 16 hours of battery life on a single charge and comes with up to 4TB of SSD storage. HP will sell the EliteBook 1050 G1 in the US later this month with a starting price of $1,899 (approximately Rs. 1,28,300).

In addition to the new Elite and EliteBook models, HP has brought the EliteOne 1000 AiO G2 that features a 34-inch curved display panel and a flexible design. There is also a pop-up full-HD dual front cameras as well as a front-facing IR camera. Similarly, HP has provided audio backed by Bang & Olufsen and dedicated collaboration keys. This combination makes the EliteOne 1000 AiO G2 a perfect fit for collaboration. It will be available for purchase in the US starting June with an initial price tag of $1,279 (approximately Rs. 86,400).

To give more from the expanded Elite family, HP has launched the EliteDisplay S14 that adds dual-screen productivity to new models. The display has USB Type-C connectivity and comes with a cover that looks similar to the foldable cover of an iPad. The HP EliteDisplay S14 will go on sale from July with a starting price of $219 (approximately Rs. 14,800).

Coming towards the new Envy range, there are the HP Envy 13 and Envy 17 notebooks that have an all-metal design available in pale gold and natural silver colour options. Customers can pick from the eighth-generation Intel Core or AMD Ryzen processors, coupled with optional Nvidia GeForce MX150 or Radeon Vega graphics. The notebooks also include a fingerprint reader, optional HP Sure View, and Intel Optane memory. Further, the Envy 17 has an optional 17-inch 4K display. While the Envy 13 starts at $999.99 (approximately Rs. 67,500), the Envy 17 comes with an initial price of $1,049 (approximately Rs. 70,900). Both are expected to go on sale through HP's official site later this month.

For a smarter AiO experience, HP has brought the Envy Curved AiO 34 that includes Amazon Alexa integration. The AiO also has a pop-up privacy camera and microphone and includes up to eighth-generation Intel Core i7 processor that can be paired with optional Nvidia GTX 1050 graphics and up to 16GB of RAM. HP has also provided an intuitive audio dial that gives a natural way to control the volume or skip songs on a playlist. With Alexa support, the AiO also listens to voice commands and offers results such as weather forecasts and the latest news headlines - all without the press of a button. Furthermore, there is a Quad HD display that supports HDR video playback and Bang & Olufsen-powered audio. The HP Envy Curved AiO 34 will go on sale sometime later this year, while customers in the US will be able to pick the HP Envy AiO 27 later this month with a starting price of $1,399 (approximately Rs. 94,500).

Last in the new range is the HP Envy Desktop that has eighth-generation Intel Core processors along with optional Nvidia GeForce GTX 1080 graphics and Intel Optane memory. It will be available later this month with a price starting at $799.99 (approximately Rs. 54,000).