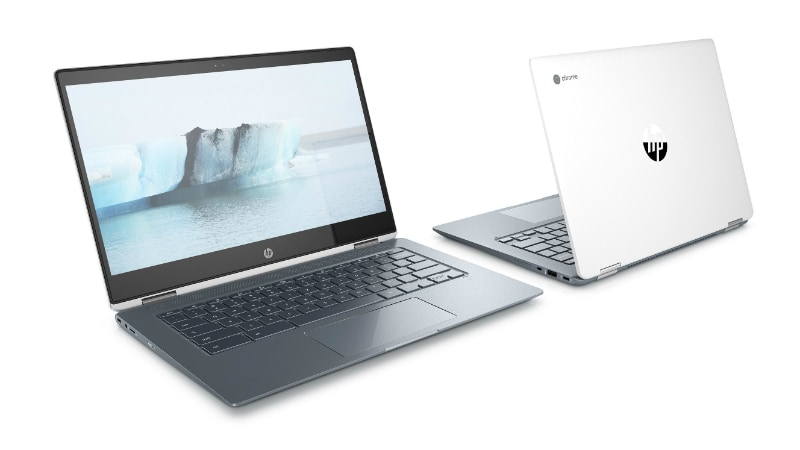 Among other persuasive features, the HP Chromebook x360 14 features a ceramic-like White finish that comes from an Advanced Electrodeposition (AED) application. The Chromebook also has the metal characteristic along with a scratch-resistant build and a 3D stamped metal keyboard deck as well as a diamond-cut trim design on the touchpad. The anodised aluminium keyboard deck also comes in Cloud Blue with colour-matched keycaps and backlit support. There is a 14-inch full-HD WLED-backlit (1920x1080 pixels) display that sports a 7.5mm thin bezel. The system also has an HD Wide Vision webcam. Under the hood, the Chromebook x360 14 has up to eighth generation Intel Core i3 and Core i5 processors, along with 8GB of DDR4 RAM, Intel Graphics 620, and 64GB of SSD storage. It is also touted to deliver up to 14 hours of battery life on a single charge.

As a premium offering, the HP Chromebook x360 14 has Bang & Olufsen-tuned dual speakers. There is an array of ports for connectivity that includes two USB Type-C ports, a USB Type-A (v3.1) port, microSD card slot, and audio jacks. The presence of Google's Chrome OS brings a bunch of Google apps, including Google Chrome browser and Google Drive integration. Also, there is two years of complimentary 100GB of Google Cloud storage access. The Chromebook also supports Android apps via Google Play.

The HP Chromebook x360 14 will be available for purchase through the HP website with a starting price of $599. It is already on pre-orders through BestBuy.com and is expected to reach Best Buy stores starting October 21.

Unlike the HP Chromebook x360 14, the Asus Chromebook C423 comes in two different variants that both have up to 8GB of SDRAM and 32GB as well as 64GB eMMC storage options. While one Chromebook C423 variant features a 14-inch 1366x768 pixels non-touch display and is powered by a dual-core Intel Celeron N3350 processor, the other has a full-HD touchscreen along with a quad-core Intel Pentium N4200 processor. The display panels on both Chromebook models have 60Hz anti-glare panel along with a 45 percent NTSC colour gamut.

The Asus Chromebook C423 has two USB Type-C 3.0 ports, two USB Type-A 3.0 ports, and a headphone/ microphone combo jack. In terms of wireless connectivity, Asus has provided 802.11 a/b/g/n/ac and Bluetooth 4.0. There is a chiclet-style keyboard. The Chromebook also flaunts a 180-degree hinge and dual stereo speakers. Besides, it measures 322.6x228x16.1mm and weighs 1.2kg.