HP has released several Chromebooks till date, and it seems the venerable PC maker has no intentions to stop just yet. The company in collaboration with Google on Thursday launched its latest Chromebook 13 laptop, the Chromebook 13 G1, priced at $499 (roughly Rs. 33,200) for the base model. It is listed on HP's US website, and is said to go on sale this month.

Looking at the Chromebook 13 G1's design, which boasts of a brushed anodised aluminium body along with the HP's glossy iconic logo, it's hard not to see the similarities with Apple's 12-inch MacBook. It even bears USB Type-C ports, and no Ethernet port. It weighs in at 1.29 kgs, and measures 319.9x219.6x12.9mm, which is thinner than the 13.1mm Apple MacBook - the MacBook is lighter however, at 0.92 kgs.

HP claims the business-ready laptop is 'ultra-thin' and features several security apps to protect sensitive data. It's also claimed to have the "first docking solution for a Chromebook", which enables the laptop to power dual-HD displays, access wired networks, and more conveniently charge devices with the increased number of USB Type-C ports the optional HP Elite USB-C Docking Station offers. 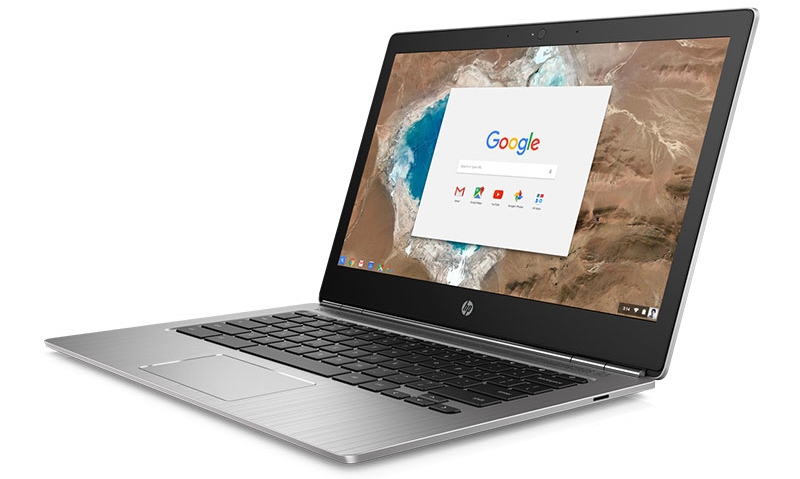 The HP Chromebook 13 G1 is backed by a 45Wh Li-ion battery. In the full-HD display model, the battery is said to run for 11.5 hours - similar to Apple's rating for the MacBook. One of the highlights of the Chromebook is that its dual audio speakers are powered by Band & Olufsen Play tech. Some of the free accessories buyers will be receiving along with the Chromebook 13 G1 are HP Elite USB-C Docking Station, HP Slim Ultrabook professional top load case, USB Type-C to HDMI adapter, USB Type-C to VGA adapter, and USB Type-C to USB 3.0 and DP adapter.

Chrome OS was recently in news as it was reported that Google might finally bringing its millions of Android apps on to the Chrome OS giving latter the access to Google Play. We will probably get to know more at the upcoming Google I/O conference next month.