Google Assistant Is Coming to Chromebooks, Google Reveals Ahead of Wednesday Launch 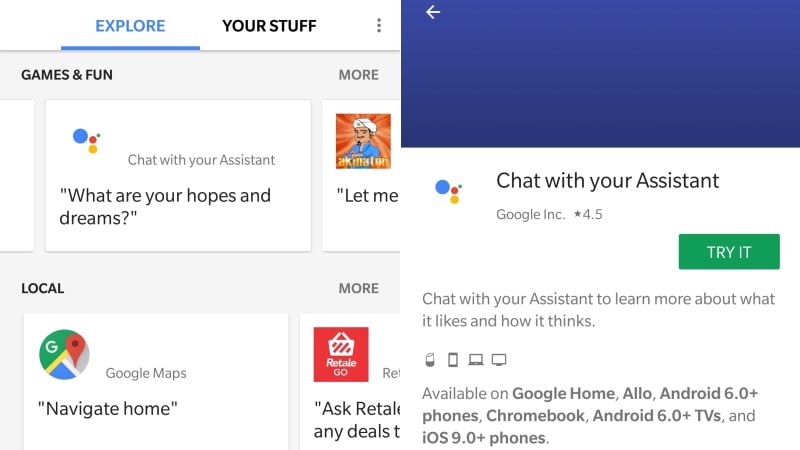 Google is tightlipped about the products and the features of its new offerings that it will launch on Wednesday, October 4, but now a quiet listing on the Google Assistant app shows users could soon use company's artificial intelligent (AI) virtual assistant in Chromebooks.

As per a report in 9to5Google, hidden quietly in Google Assistant app is a mention that some Assistant applications will work with Chromebooks. We were able to spot the same listing ourselves.

"Listed in the compatibility section of the Chat with your Assistant 'game' right alongside phones, Google Home, and Allo is Chromebooks, clear as day," the report said.

This seems to be an indication that Assistant is definitely coming to Chrome OS and it could debut on the recently leaked Pixelbook. The new Chromebook is expected to launch on Wednesday, October 4, the same day Google is anticipated to launch the Pixel 2 and Pixel 2 XL smartphones, as well as the Google Home Mini speaker.

As per reports, the Pixelbook will be a high-end product in the category, just like the Chromebook Pixel. The Google Pixelbook will reportedly come with a pressure-sensitive stylus, called the Pixelbook Pen, and will be offered in three storage variants: 128GB, 256GB, and 512GB. The 128GB storage variant has been tipped to be priced at $1,199 (roughly Rs. 77,200), while the 256GB and 512GB variants are expected to be priced at $1,399 (roughly Rs. 90,000), and $1,749 (roughly Rs. 1.12 lakhs) respectively by the company. Notably, the Pixelbook is said to fold into a tablet, which differentiates it from earlier Chromebook Pixel devices.