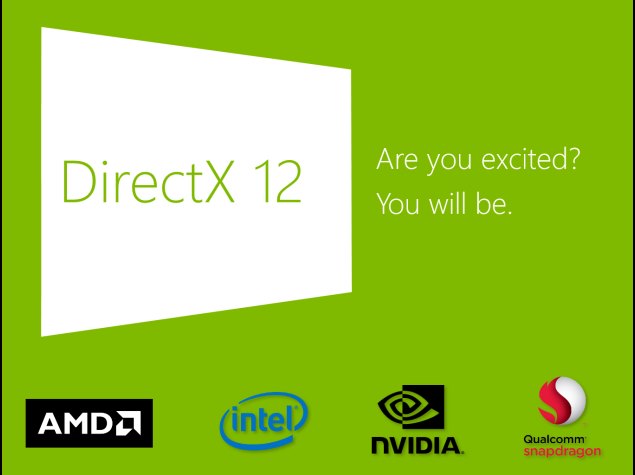 Microsoft has taken the wraps off DirectX 12, the latest version of its set of APIs for gaming and multimedia applications. DirectX allows hardware and software to interoperate, creating a standard platform for game developers to build on across hardware from various brands. DirectX 12 is designed to improve performance scaling for modern hardware, and reduce processing overhead by allowing software developers to access more hardware features than before. Other significant improvements include a reduction in CPU usage of up to 50 percent, and better distribution of work between CPU cores.

DirectX 12 is currently in an alpha state, and Microsoft is targeting a winter 2015 release, to line up with games released in the busy holiday season. The demonstration at the ongoing Game Developers' Conference in San Francisco was focused on Direct3D, the primary graphics component of DirectX.

Microsoft has reaffirmed support for Direct3D across all its platforms: Windows, Xbox, Windows Phone and even Windows RT. The most significant improvement is its ability to address different hardware architectures while offering developers a standardized platform with minimal translation overheads. Specific improvements include performance gains in transparency effects, collision detection, and geometry overlap detection.

Microsoft listed AMD, Intel, Nvidia and Qualcomm as major supporting partners at its GDC panel, titled DirectX: Evolving Microsoft's Graphics Platform. The inclusion of Qualcomm illustrates the growing importance of mobile platforms. AMD also supports DirectX on all its graphics hardware, but its own recently announced Mantle APIs provide much the same functionality that was outlined for DX12, with regard to low-level access to hardware features.

DirectX 12 will be supported on current DirectX 11 hardware, which Microsoft says accounts for up to 80 percent of gaming PCs shipping today. Nvidia will roll out support for all its Fermi, Kepler and Maxwell cards, which should include cards going back to the 2010-era GeForce 400 series. AMD indicated that its Graphics Core Next (GCN) cards onwards would be supported, which would include only some products in the Radeon HD 7000, R7 and R9 series. For mobile devices, the key promise is lower power consumption, thanks to a reduction in processing overheads.

On the software side, Windows 8 and 8.1 are supported, but Microsoft declined to comment on support for Windows 7. The Xbox One will also be able to take advantage of various improvements related to performance and power consumption.