From text to touch, a look at Microsoft systems 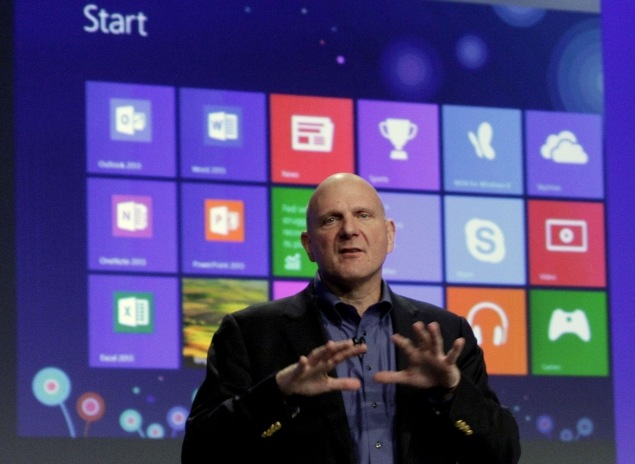 Microsoft Corp. got its start on PCs in 1981 through a partnership with IBM Corp. Microsoft made the software that ran IBM's hardware, and later machines made by other manufacturers. That first operating system was called MS-DOS and required people to type instructions to complete tasks such as running programs and deleting files.

It wasn't until 1985 that Microsoft released its first graphical user interface, which allowed people to perform tasks by moving a mouse and clicking on icons on the screen. Microsoft called the operating system Windows.

In July 1993, Microsoft released Windows NT, a more robust operating system built from scratch. It was meant as a complement to Windows 3.1 and allowed higher-end machines to perform more complex tasks, particularly for engineering and scientific programs that dealt with large numbers.

Microsoft had its first big Windows launch with the release of Windows 95 in August 1995. The company placed special sections in newspapers, ran television ads with the Rolling Stones song "Start Me Up" and paid to have the Empire State Building lit up in Windows colors.

Comedian Jay Leno joined co-founder Bill Gates on stage at a launch event at the company's headquarters in Redmond, Wash.

"Windows 95 is so easy, even a talk-show host can figure it out," Gates joked.

The hype worked: Computer users lined up to be the first to buy it. Microsoft sold millions of copies within the first few weeks. Windows 95 brought built-in Internet support and "plug and play" tools to make it easier to install software and attach hardware. Windows 95 was far better and more successful - than its predecessor and narrowed the ease-of-use gap between Windows and Mac computers.

At around the same time, Microsoft released the first version of its Internet Explorer browser. It went on to tie IE and Windows functions so tightly that many people simply used the browser over the once-dominant Netscape Navigator. The U.S. Justice Department and several states ultimately sued Microsoft, accusing it of using its monopoly control over Windows to shut out competitors in other markets. The company fought the charges for years before settling in 2002.

The June 1998 release of Windows 98 was more low-key than the Windows 95 launch, though Microsoft denied it had anything to do with the antitrust case.

Windows 98 had the distinction of being the last with roots to the original operating system, MS-DOS. Each operating system is made up of millions of lines of instructions, or code, written in sections by programmers. Each time there's an update, portions get dropped or rewritten, and new sections get added for new features. Eventually, there's nothing left from the original.

Microsoft came out with Windows Me a few years later, the last to use the code from Windows 95. Starting with Windows 2000, Microsoft worked off the code built for NT, the 1993 system built from scratch.

The biggest release since Windows 95 came in October 2001, when Microsoft launched Windows XP at a hotel in New York's Times Square. Windows XP had better Internet tools, including built-in wireless networking support. It had improvements in media software for listening to and recording music, playing videos and editing and organizing digital photographs.

Microsoft's next major release didn't come until Vista in November 2006. Businesses got it first, followed by a broader launch to consumers in January 2007. Coming after years of virus attacks targeting Windows machines and spread over the Internet, the long-delayed Vista operating system offered stronger security and protection. It also had built-in parental-controls settings.

But many people found Vista slow and incompatible with existing programs and devices. Microsoft launched Windows 7 in October 2009 with fixes to many of Vista's flaws.

Windows 7 also disrupted users less often by displaying fewer pop-up boxes, notifications and warnings allowing those that do appear to stand out. Instead, many of those messages get stashed in a single place for people to address when it's convenient.

In a sign of what's to come, Windows 7 was able to sense when someone is using more than one finger on a touchpad or touch screen, so people can spread their fingers to zoom into a picture, for instance, just as they can on the iPhone.

Apple released its first iPhone in 2007 and the iPad in 2010. Devices running Google's Android system for mobile devices also caught on. As a result, sales of Windows computers slowed down. Consumers were delaying upgrades and spending their money on new smartphones and tablet computers instead.

Windows 8 and its sibling, Windows RT, represent Microsoft's attempt to address that. It's designed to make desktop and laptop computers work more like tablets.

Windows 8 ditches the familiar start menu on the lower left corner and forces people to swipe the edges of the screen to access various settings. It sports a new screen filled with a colorful array of tiles, each leading to a different application, task or collection of files. Windows 8 is designed especially for touch screens, though it will work with the mouse and keyboard shortcuts, too.

Microsoft and PC makers alike had been looking to Windows 8 to resurrect sales. Microsoft's launch event Thursday was of the caliber given for Windows 95 and XP.

But with Apple releasing two new iPads, Amazon.com Inc. shipping full-sized Kindle Fire tablets and Barnes & Noble Inc. refreshing its Nook tablet line next month, Microsoft and its allies will face competition that is far more intense than in the heyday of Windows 95 and XP.