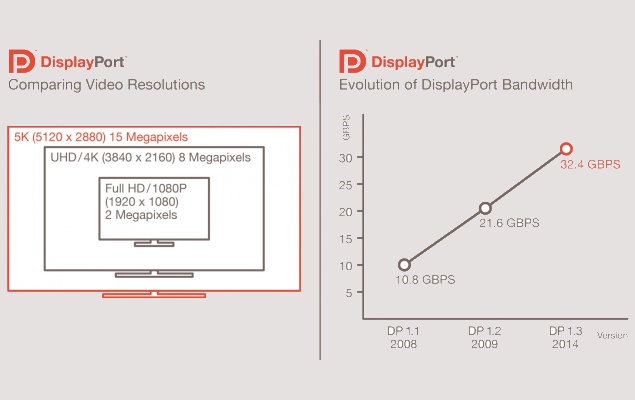 The Video Electronics Standards Association on Monday has announced the release of the DisplayPort 1.3 audio/ video (A/V) standard that supports 5K (5120x2880 pixels) monitors using a single DisplayPort cable without the use of compression.

DisplayPort 1.3 is an update to the widely used DisplayPort 1.2a standard. The latest version of DisplayPort with 5K support also enables higher resolutions when multiple monitors are connected through a single connection using DisplayPort's Multi-Stream feature, such as two 4K UHD monitors, each with a pixel resolution of 3840x2160, using VESA Coordinated Video Timing.

The new standard increases the maximum link bandwidth to 32.4Gbps, which can deliver 25.92Gbps of uncompressed video data at combined link rate.

According to the company, with DisplayPort 1.3, each of four lanes can run at a link rate of 8.1Gbps, which is a 50 percent increase from the previous DisplayPort 1.2a standard. It can also support a single UHD monitor with 60Hz refresh rate and 24-bit colour over two lanes.

The company notes that the DisplayPort 1.3 also enables support for the 4:2:0 pixel structure and future 8K x 4K displays. It also continues to support video conversion to VGA, DVI, HDMI and adds support for HDCP 2.2 and HDMI 2.0 with CEC (Consumer Electronics Control).

"While becoming a mainstream video standard, DisplayPort continues to be at the cutting edge of A/V transport," said VESA Board of Directors Chair Alan Kobayashi, Fellow & Executive R&D Management for DisplayPort Group at MegaChips Technology America. "These new enhancements to DisplayPort will facilitate both higher resolution displays, as well as easier integration of DisplayPort into multi-protocol data transports, which will satisfy consumer's desire for simplicity and ease-of-use."
Comments